"Gone are the days when I could bounce right back again".

Hope you will like this song by Justin Hayward.  He is still touring with the Moody Blues but he just released a solo album (Spirits of A Western Sky)  and this particular song was on his last solo album (TheView From A Hill) but this time, it is done in a Blue Grass style of music.  The musical arrangement might be slightly different, but the singing is the same and just as good.  I love that his voice is just as strong and clear as it ever has been. (I couldn't find a video of this song from his new album, you will just have to take my word for it!)    Richard and I are big fans of the Moody Blues.
Hope you like this too. 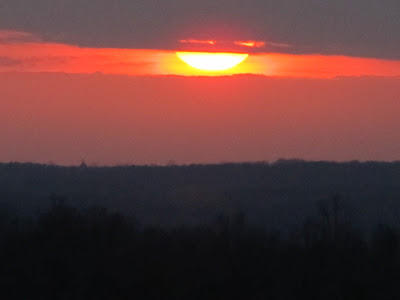 And of course, I have to give you a western sky!   This is another sunset from Arabia Mountain.
I hope that I can talk Richard into doing a guest post about the Moody Blues.  I think it is time to hear from him again, don't you?