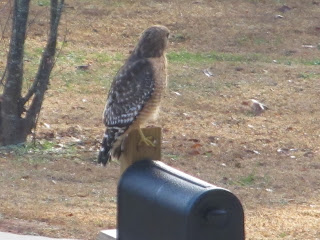 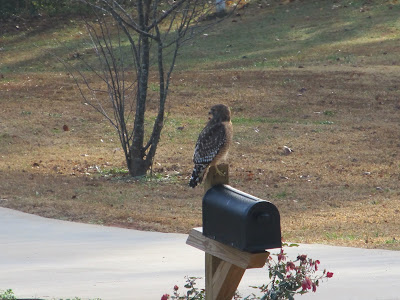 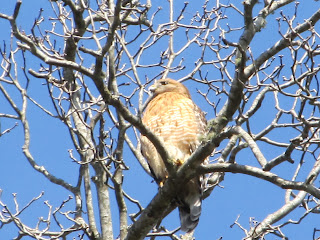 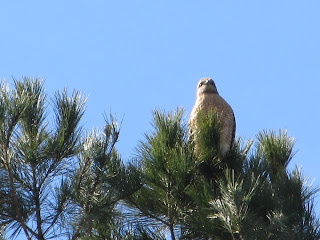 Hey! Let's observe a live cam of red tailed hawk's nest at Cornell University in Ithaca, New York.  Shall we?  I just discovered this and I was very happy to find it.  There are three eggs in the nest now and if you go to that link you can also see a video of the bird laying the eggs. There is also a clip showing one of the birds on the eggs all night even with the snow falling down!
The red-tailed hawk is one of the most common hawks in North America. Richard took a photo of one on the mailbox across the street from us.  This month, we had to take some trees down and a hawk landed on either side of the trees being cut down as if to say, "Well, I hope you're not going to take them ALL down!"
(Don't worry, we won't!)
Red tailed hawks are very common in Georgia.  Their loud cries are very commonly used in movies, often described as the sound of an eagle! You may read some interesting facts about the red tailed hawk here.
UPDATE: If you look at the comment below, you will see that this photo is of a red shouldered  hawk, it is similar to a red tailed hawk but the markings on the wings of the red shouldered are more distinctive and that is what Richard has photographed for you here!
"The more clearly we can focus our attention on the wonders and realities of the universe about us, the less taste we shall have for destruction."   I really love this quote...I just found it scribbled on a piece of paper in my handwriting but I don't know who said it or where I found it.
Wish us luck, Richard and I will climb Panola Mountain tomorrow in the final monadnock climb for our Monadnock Madness climbs in March.  There is a 70% percent chance of rain and the final descent is called the "butt slide" since it is so steep, some come down on their backsides!
Posted by Kay G. at 10:20 PM