I am mad about monadnocks!   If you read my blog, you know how much I love Arabia Mountain and Stone Mountain.  They are called mountains but are really monadnocks.  This is the very scientific way that the Arabia Mountain website tells you the meaning of monadnock....

"A monadnock is a special type of mountain that is formed when a massive blob of lava hardens and creates a very hard clump under the earth. Over millions of years the softer rock around the clump is eroded away leaving a huge mountain that juts out of the flat landscape around it. This process is how Arabia, Panola, and Stone Mountains were all formed."

Ha! A massive blob of lava, I love it! There, you see Arabia and Stone Mountain, but I have not spoken of Panola Mountain that much.  That is because you can ONLY climb Panola Mountain with a guide and that is only allowed on certain days.  There are trails that are near Panola Mountain and you have seen our photos of the lake and river trails there but Panola Mountain itself can only be climbed with a guide.  Last year, I did a post where I did Stone Mountain and Arabia Mountain on the same day, just because I thought it be neat to say that I had done them both!  Well, guess what?  During the month of March, FOR THE FIRST TIME, they are having a fun event called "MONADNOCK MADNESS" and the plan is to climb all three during the month of March.  (Hmmm... could they have gotten the idea from me?  Gee, that would be neat if I inspired anybody to think of that!  Cool, even!) They even had some dates that you could sign up for all three on the same day and I really wanted to try for that, but the dates didn't work out for me, so I will just be taking a photo of myself on each peak and sending it into the website for the different dates during the month of March.  I know, I am such a big kid, but hey, I love my mountains/monadnocks, as you all well know! Here's the link if you'd like to read more:  monadnock madness

We went to Stone Mountain this past Sunday and have been to Arabia Mountain twice in the month of March already...now we have signed up to do the Panola Mountain climb on March 30th! (Yes, we are just getting in by the end of the month!)   We have only climbed Panola just one other time (we climbed it in early December) but I didn't post any photos of that trip.  Richard was behind me and all you mostly see is my rear end...speaking of which, at the end of the hike, they actually call it the "Panola Mountain Butt Slide".  I kid you not, it is so steep that some find it more comfortable to slide down on their bottoms.  Now, what do you think that I did when I came down?  After all, I am getting on in years and I am not in the best shape... Of course, I stayed on my two feet, it would have to be VERY steep to make me slide down on my bottom!!  Goodness, I am such a dignified lady after all! HA! 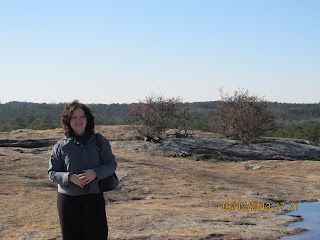 You are supposed to get a special gift if you send in your three photos from the top of each peak BUT the prizes are limited and first come, first served....you know how that goes, don't you?  Oh well, even if I don't get whatever prize they have, I still will know that I climbed all three monadnocks during the month of March! And if they could just let me know that I inspired the idea, that would even make me happier than the prize! 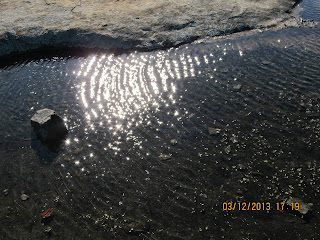 That is the photo of me with my huge basketball head that I will be sending in.
Also, I wanted you see the photo of the sparkling water in one of the pools on top of Arabia. Hey, I took this photo!! I only had the camera because I was about to take a photo of Richard... 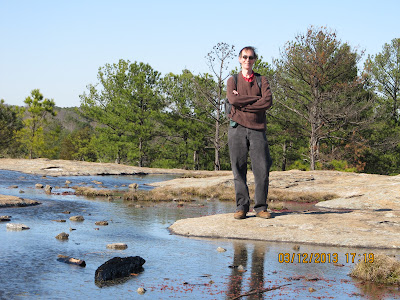 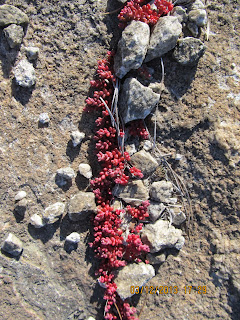 I am telling you, I LOVE these monadnocks!!  (And you know, of course, that Richard took this photo of the rocks with the diamorpha.)
Posted by Kay G. at 9:38 PM