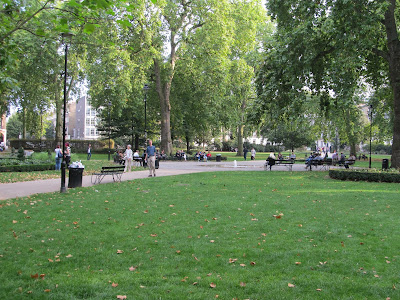 Hey!  If you look at the side of my blog, you will read that I married my pen-friend!  How corny is that?  HA!  Oh well, SOMEBODY had to marry me, might as well be the nicest guy on Earth. (Okay, I know you are thinking...he MUST be if he married YOU!  HA!  It's true!)

One of my blogging friends recommended a book to me entitled, "Dear Stephanie, Dear Paul".  It is a book of a collection of letters written between two pen-friends, one from America and one from England.  Thank you, Kristi, for telling me about this book!  I love it!  The complete title is : Dear Stephanie, Dear Paul: A Transatlantic Love Story Told Through the Correspondence of Stephanie Grant and Paul M. Duke, 1948-1949.

Of course, you will think that I would love this book because I see the similarities between my husband and myself and you would be correct but I think that anyone should like this book!  Anyone who loves reading about the lives of an obviously intelligent and fascinating couple that is! It is interesting to read what it was like in the late 1940's from the viewpoint of an American man and an English woman.  The letters are like small time capsules.

It amused me to think that I would have more in common with Stephanie, but really...it was PAUL that sounded more like me in my letters!  You don't really think of your nationality in terms of your personality but I found myself very much echoed in the strong enthusiasm of the young man from Ohio and I see Richard's English quiet reserve and intelligence in the young woman from London.  (And FUNNY, they are both funny, I laughed out loud at several spots and found myself chuckling quite often!)
Funny to me, I was more familiar with London than I was with the town where Paul lived in Ohio....I have never been to Ohio!

I already knew that wartime rationing was still in place for years after World War II in England. I  learned this from the book "84 Charing Cross Road", which I also highly recommend!  One fact that startled me:  you were allowed ONE egg every fortnight (two weeks), only ONE as late as 1948!

I truly loved this book and I feel a fondness for this engaging couple.  Paul was a real Anglophile and a great lover of the theatre.  They were both great writers and that comes across in their letters to each other.  I would have loved to have met them and told them this.  They have both died now but their book is still here to show us that it is possible to have a long and successful marriage even though one is American and the other is British! Of course, you know they got married!   I would have loved to have talked with them and asked them if they had problems with communication between American English and Proper British English...Richard and I still do!

"That Lucky Old Sun" was mentioned in the book by Paul and Stephanie, so I have it here for you. 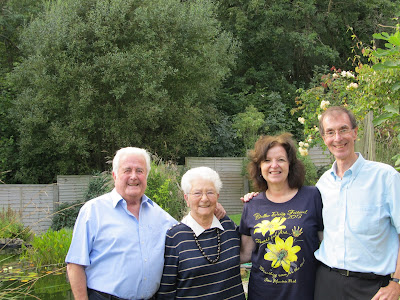 Paul and Stephanie married in 1950...and I will show you another couple that married the same year!  We are posing here with another dear couple from England, our friends, Joy & Henry.
They will be celebrating their wedding anniversary in July, it will be their 65th.
YES, I typed that correctly...65th!  I know, it can't be possible, they look so young!
Happy Anniversary to Joy & Henry also,  just a wee bit early.
Posted by Kay G. at 10:08 PM