Cold enough for you? (Not if you live in Australia, you are too hot!) This might not be a good time to tell you about this new film coming out if you are living through the Polar Vortex in the USA! Did you see that they were setting fire to the train tracks in Chicago in order to warm them up? There have been at least 6 deaths linked to this extreme cold. This is an extremely dangerous thing.
And forget about that politician saying that Americans are "soft" because many schools and businesses were closed. I would like to see him standing in sub-zero weather waiting for a school bus before sunrise!  Okay...back to telling you about this movie...

"Arctic" will be released on Feb. 1st in theaters and it is being called one of the best survival movies of all time.  Now, I do enjoy these kind of films, as you know, although, I prefer that they be based on a true story and as far as I can tell, this is fictional. Still, it looks good, don't you think?  I admire the people who can take stock of their situation and survive no matter what.  How do you think you would fare in a survival kind of situation? I hope I never have to find out but I suspect that I would be a blubbering mess.

I only watched a bit of that trailer...you may watch it all, of course, but sometimes, I think it might spoil it a bit if TOO much is revealed.   By the way, "Arctic" received a 10 minute standing ovation at the premiere at the 2018 Cannes Film Festival. 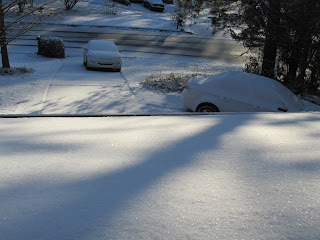 In Georgia, we have NOT had any snow. (The photo above is from January of last year.)   To be honest, I think that I am old enough to like snow only in pictures or on Christmas cards...you can HAVE it!

I've been thinking of this song lately...I am sure you must know it too.  "Turn! Turn! Turn!" is a song that was written by Pete Seeger in the late 1950's but was a big hit for the Byrds in 1965.  Interesting to note that the words to this song are almost word for word from the Bible (King James) from Ecclesiastes 3:1-8.   At the end of the song, after it says "a time for peace", it then says, "I swear it's not too late".  So, that last line and the "turn, turn, turn" line...they are the only words from Pete Seeger, all the rest is from the book of Ecclesiastes! (Of course, the words are re-arranged a bit, but all are from the Bible.)

I am sure you all must know this but as I say, this song has been in my mind this week, so I wanted to share it here.

Hope you are all doing well and getting through this winter.  Take care, my blogging buddies!  I keep hoping to get back to my blogging which I enjoy so very much.  Thank you for being my friends out there in this world, you know who you are! 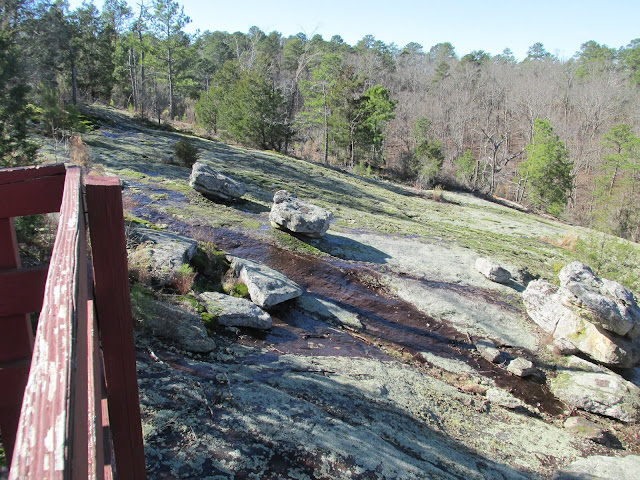 A rock outcrop at Panola Mountain State Park on a rare day that we were able to walk there.
Posted by Kay G. at 9:40 PM 36 comments:

"Star Trek" and "The Gallant Hours" (With Respect To Gene Roddenberry)


Did you ever have one of those days where you just want to say "Beam me up, Scottie. No intelligent life here!"   Maybe you watch the news and feel as if you want to respond (in a deep voice, of course) "That is not logical."  If so, you might be a Star Trek fan!

Star Trek was first shown on TV in 1966 and was only on for three seasons but became quite popular when it was shown in syndication. Gene Roddenberry was the creator behind the series and I have read that he was inspired by "Horation Hornblower", Gulliver's Travels" and the TV Western "Wagon Train."   Might I suggest that he also might have been influenced by a film called "The Gallant Hours"?  Have you ever seen it?  It is a film with James Cagney playing the part of Admiral William Frederick Halsey, Jr.  (He is most well known as Admiral "Bull" Halsey, ) As I watched this film, with the magnificent Jimmy Cagney playing the Admiral interacting with his crew...I had a strong sense of deja vu.  It was very much like Captain Kirk on the Starship Enterprise!  Wait...wasn't Gene Roddenberry in World War II?  And wasn't he in the South Pacific?  I looked it up and yes, he served there in the war...
I do wonder if it could be possible that he also liked "The Gallant Hours" as much as I did and maybe, this film might have given the idea to the characters that he created.   When I say to you that it is an unusual war movie, not really any big war scenes to speak of...rather it is the people that you remember. (And the music, the soundtrack is unusual but most effective.)   Oh dear, I hope I am explaining this to you properly!   You see, Star Trek is that way...the old TV series had the funniest old fake rocks and laughable special effects but it was the characters and the stories that you remembered. It was so wonderful to think of the crew from different countries (and even different planets!) and all still getting along.  (Well, most of the time anyway!)

Did you know that the actress who played the communications officer, Lt. Uhura, felt that she was thinking about leaving the show in order to concentrate on her singing career?  She didn't because Martin Luther King, Jr. contacted her and told her to to stay right where she was...it was that important for the American public to see a character like hers, a person of color, in one of the few non-stereotypical roles on TV at that time. 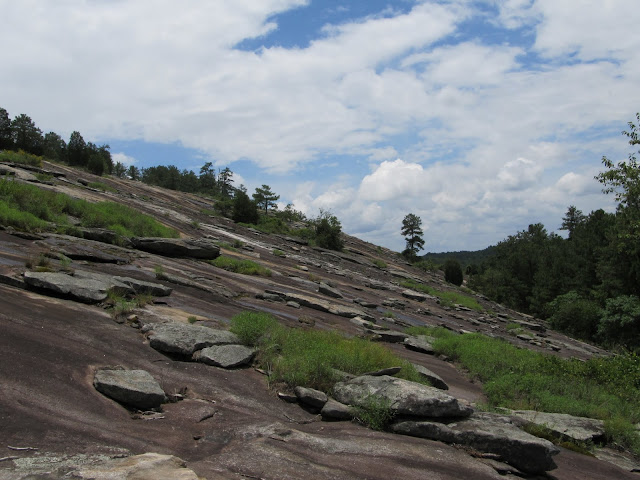 English joke (you must say this in an English accent):
How many ears does Captain Kirk have?
He has 3...the left ear, the right ear...and the final front ear! (Frontier)

I am sure that you are wondering what song will I choose to go with this post...and you might think that I will give you the "Uncle Albert/Admiral Halsey" song by Paul McCartney but NO! That would be too obvious!  By coincidence, I was singing a song this weekend...it just popped into my head and a jolly good song it is too.  "Only You" by the Platters. (Please click on the link and listen to it! It is marvelous!)  The lead singer is Tony Williams and I looked him up...it just so happens that he was born in Elizabeth, New Jersey.  When I was looking up the background on Admiral Halsey, can you believe it...he was also born in Elizabeth, New Jersey!  Doesn't make a bit a difference really, but if you look for them, you can always find connections, lives interwoven with other lives in the smallest of ways.

Oh! And just thought of telling you this...so funny to me...the actor who played the doctor on Star Trek, DeForrest Kelley? HE was born in Toccoa, GA and lived in Conyers, GA! (Just like me, if you notice.) See, we are all connected, I tell ya...if you don't think so, give me a minute and I will find it for you, you know I will.


Now, I hope that you will search out "The Gallant Hours" and then, that you will ponder my great wisdom from my years of watching TV! For the wonderful fans of Star Trek (I am thinking of you, Meike!) I wish that I could have written a bit more eloquently about a TV show that is near and dear to your heart.

Hope you are all doing well.   I have a sunflower just now as my header photo.  Not sure about you but I felt the need for it!
LIVE LONG AND PROSPER!  (Can you do the Vulcan salute? You know I can.)

Am I All Alone (Or Is It Only Me)- Roger Miller


Songwriting!  By now, you must know how much I admire those who write songs, whether it be music or lyrics or both! One of the many songwriters that I admire is a man by the name of Roger Miller. Remember him? He had big hits with "King of the Road" and "England Swings" in the 1960's. I loved the songs that he wrote and sang in the 1973 Disney film "Robin Hood"! And if you remember, he also did the narration for that movie! Many of his songs were humorous "You Can't Roller Skate In A Buffalo Herd" but if you search carefully, you will find that he truly was a genius at songwriting and I think should be honored for this.  (Sadly, he died in 1992.)
Roger Miller was a great friend of Glen Campbell. On Glen's last album, "Adios", one of the tracks is "Am I All Alone (Or Is It Only Me)" and it was written by Mr. Roger Miller.  (In fact, his wife had a cassette recording of Glen and Roger singing this song together, and it is included on this CD!)  It is a very good song but I must say, until I got this CD by Glen Campbell, I had never heard of it. (Can't find the song to put on this post, but if you search for it, I think you will like it.)

Looking a bit further, I see that there was an album released this past August in tribute to Roger Miller! Those featured on the album include Willie Nelson, Dolly Parton, Ringo Starr, Brenda Lee, Kris Kristofferson and many others!  How could this happen and I knew nothing about it?  Do you sometimes feel like you are the last one to know about something? (Am I All Alone...Or Is It Only Me?)  You know I had to say it!

Instead of giving you a clip from the tribute album, I found his son,  Dean Miller, singing "King of the Road" from one of my Dad's favorite TV shows, "Country's Family Reunion"! I love how he speaks of his father before the song...that his father left behind  "a legacy of JOY".

This is my first post for 2019.  Gee, I hope I get myself a bit more organized so that I can spend more time on my blog!  Y'all know I have a lot to tell you about! 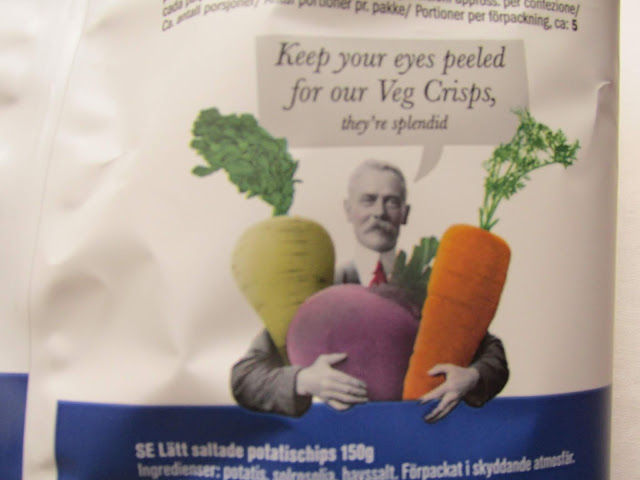 Yes, I have been known to take photos of packages if I find them amusing.  Richard does too! One must find amusement where one can! 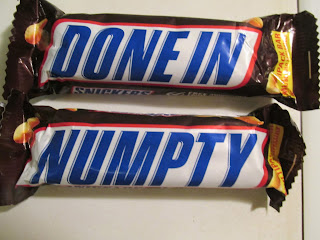