August Anniversary! (Blogging, That Is.)

Before August gets away from me, I have to tell you that August 21st was my blogging anniversary.  Since 2011, I have been sharing my words and photos with you! 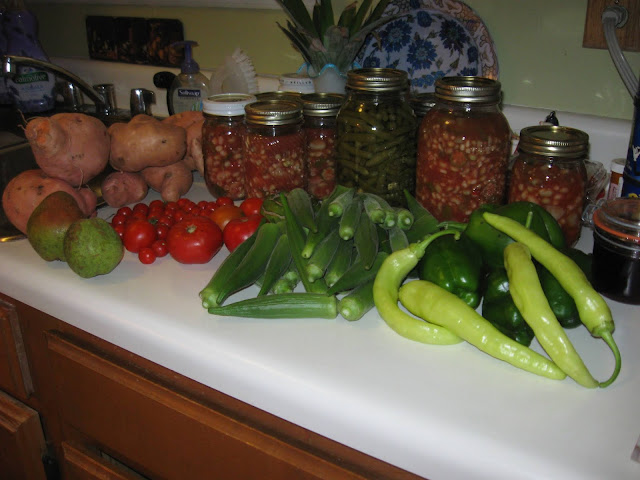 Thank you to all who have taken the time to read my words, I truly appreciate every one of you.  This year has been a bit difficult for me to blog and that is bad for me because I really do like to write.
I write constantly! I had to sort through some papers recently, both at home and at work...you have no idea how much this turned out to be!  I jot down quotes and lyrics from songs and then, it makes me think of other things and I write and write and write....

Guess I don't have to tell you all that! Anyway, thanks very much for sticking with me, my friends. Not only do I like to write but I like to read too and I have so much enjoyed learning the stories from so many of my blogging friends, from the USA and from around the world!

I get by with a little help from my friends.

We have a monastery right here in Rockdale County, Georgia.


I have written about the monastery before.  Look at the side of my blog, you will see one of my most viewed posts is about the Monastery.  In that post, I mentioned the monk who wrote in our local paper, James Stephen Behrens. (He had written about Amy Winehouse  and how cruel people could be on the internet.)  He died recently and his memorial service was last week.  I will very much miss his column in the Rockdale Citizen.


You may read more about him just here.  And if you go to that link, you will be tickled by the fact that one of the monks made a mistake listing the date of the memorial service and he called himself a "bad monk". (Made me smile.)


James Stephen Behrens wrote several books and his main theme is that grace is in the ordinary things of life.  "Portraits of Grace" is a lovely book with beautiful photos from the Monastery.


This is the second post where I have links for you to read but they are worth your time, I promise. 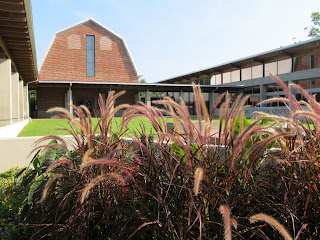 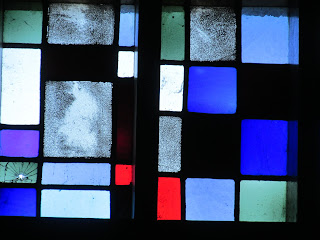 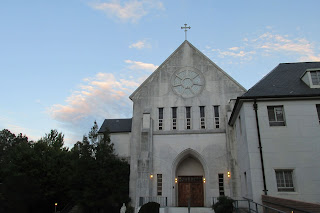 I just looked this up and read a very interesting account of someone writing memories of their childhood from there during World War II.

I have a link for you.  You may read it just here. 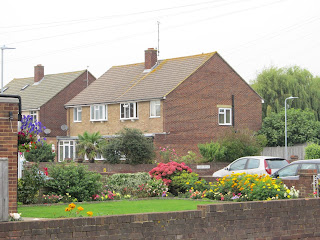 Let me know if you take the time to read it.  Thanks.

Hello, my friends!  Hope you are all well.  Me?  I had to have a crown replaced and the temporary one FELL OUT! Yes, I could write on this dang blog more often if my body wasn't falling apart!

Okay then, while I was holding the side of my face that was swollen from the intensive attention from the dentist, I watched a show on PBS which was about BICYCLES.  (I don't even like to ride a bike anymore but the show looked interesting so...watch it I did!)
An artist by the name of Alex Wong sang the song "Daisy Bell" or "A Bicycle Built for Two". (One song but it is known by both titles.)  You know that song don't you? It was written by a Brit! His name was Harry Dacre. (I didn't know that until they showed that in subtitles!)  Another songwriter for me to learn about! I find his story fascinating, you may read more about him just here. He also wrote the song "I'll Be Your Sweetheart".  I know that song from Chas & Dave!  Those are not the only two songs he wrote, it states that he sold over 600 songs in the first two years of his songwriting career!

Back to Alex Wong...he is a singer/guitarist AND a songwriter too!
By writing this post and linking those two names together in my title post, that is like waving my magical fairy wand and granting Mr. Wong success in his musical career! The clip that I have here for you is "Show Yourself" and he says that it is about the years that he wanted to perform but felt that the world would not accept him as an Asian performer. (Please don't anybody yell at me, that is what the artist has said!)   Wish I could find that clip of him singing the song that I heard on the PBS show, the "Daisy Bell" song.  It was on a show called "Reconnecting Roots" and forgive me, but it was a bit silly at times (even for me) but there were moments that were like diamonds.  The performance by Alex Wong was one of them!

Shall I speak of music forever? I could, you know.


Here I am from 2013 with a fantastic songwriter/singer and guitarist! You all know my son, Christopher!  Presto, I have just made myself six years younger! Notice my Yellow Daisy Shirt...I hope you remember my photos of those wildflowers. Love wildflowers as much as I love music. 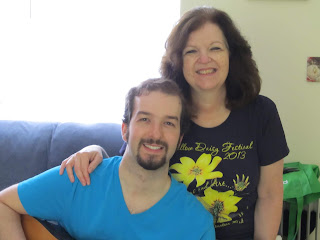 In 1974, Linda Ronstadt recorded "It Doesn't Matter Anymore" and she also wrote the guitar arrangement for the song.  It is always amazing to me how differently a song can sound with a different arrangement!  I have written about Linda Ronstadt before and I have told you that she is no longer able to sing due to Parkinson's disease.  There is a documentary that will be coming out in September, it is called "Linda Ronstadt: The Sound of My Voice".  I think it looks great!

Paul Anka, Buddy Holly, Linda Ronstadt and ME?  What do I mean by that?  Where I work, there is an upper building with a high railing on the side of that building. If I happen to pass by the railing, I often think it would be the perfect place to have a concert...and you know I have to sing a bit of a song as I walk along that certain spot. Recently, I was thinking of this song, so... There was only one co worker nearby and he smiled and gave me a fist bump! (He has heard me sing before, so I don't think this was surprising to him.)  Of course, I am at a place of business so I can't belt it out like the great Linda Ronstadt fan that I am! 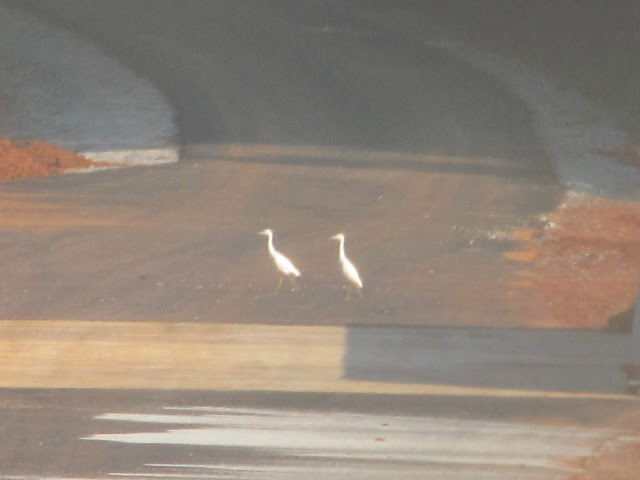 Anybody remember me telling y'all about the lakes that were drained at Panola Mountain State Park? We are still waiting for them to be refilled.  The dam looks as if it is almost finished. I took a photo of these white egrets and they seem to be saying...okay then, if you are going to build this great big dam, then we will just WALK across it!

Let me know if you are able to see the trailer for the film and also if you think that Linda Ronstadt singing that song "It Doesn't Matter Anymore" makes you want to sing along...you might even get a fist bump! 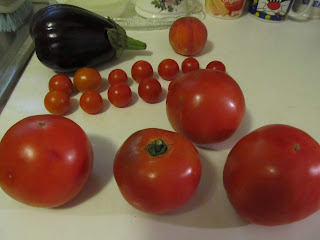 Remember my post from June when I went to Tallulah Falls and visited the shop at the top of the gorge?  There was a man there selling boiled peanuts and he also had some tomatoes growing behind his small building.  When my sister and I admired them, he told us that there were two things that money couldn't buy...true love and home grown tomatoes.   Richard and I are able to grow small cherry tomatoes but those big tomatoes in my photo above are from a friend's garden.  I am wishing you all home grown tomatoes!
They are wonderful! Nothing better than a simple tomato sandwich...you can keep your true love! HA!

Next recipe:  Banana Sandwich!   Bread, mayo, and banana. WHAT? You have never had a banana sandwich?  Okay, go make one and eat it....I'll wait. There, see how good I am in the kitchen?

P.S.  If you don't have banana, you can use pineapple!

My friends, I hope you are all doing well.  I have just received some sad news. I found out that one of my former co-workers died in July.  She worked at our company for a year and I saw her every day while she was there. Although she was not in my department, she was close enough to me that I heard her voice every working day and was able to stop and make jokes with her now and then.  I can still hear her booming laugh.  So grateful that we shared that deep laughter together. 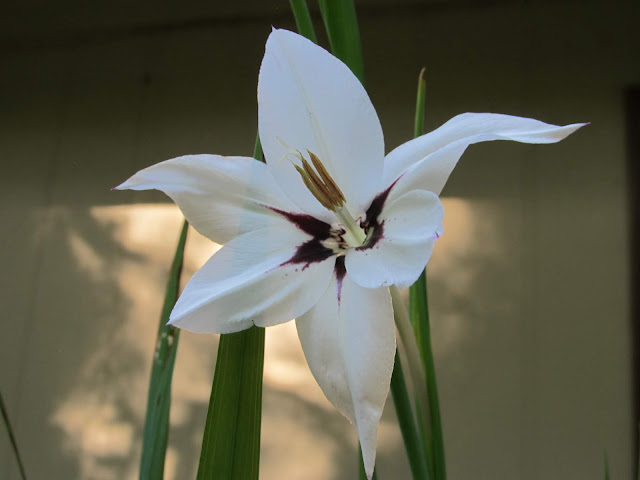