Months ago, I told you that I had read a book that I would tell you about, so I am finally keeping that promise...
If you have read my blog before, you might remember that I have mentioned Mr. Louis Zamperini and his book, "Devil At My Heels", and when I read it in 2004, I found it so moving that I wrote a letter to the publisher.  Mr. Zamperini wrote me back! When I wrote him again, he sent me a note to let me know that Laura Hillenbrand was writing a book about him.  Her book about him, "Unbroken", was released in 2010 and was named the best nonfiction book of the year from Time Magazine.    You may read my post about Mr. Zamperini here.

I have now read another book by a man from Scotland and it is also a story from World War II and he also was a Japanese POW.    It is a very moving story.  In the USA, the book is entitled :
"The Forgotten Highlander:An Incredible Story of Survival In The Pacific" and it is written by Alistair Fuquhart.  Everything that this poor man endured is almost too much to read and to absorb, it is that intense.  Alistair was in the Gordon Highlanders and was in Singapore when the Japanese overtook the city.  Forced to work on the Burma Railway (also called the Death Railway due to all who died building it)  he was one of those who built the infamous Bridge Over The River Kwai. (The movie about it is based upon a work of fiction.  JUST a movie, not like that in real life!!)  After that he was put onto one of the Japanese Hell ships which was torpedoed by a US Naval ship. (The ship was not shown to have prisoners aboard, so the author does not blame the USA.)  Adrift at sea for five days in a tiny raft, he was picked up and sent to a prison camp outside Nagasaki.  Yes, you might guess that he was knocked over by a blast of hot air one day and later found out that it was the atomic bomb which was dropped there...
After the war, he married and had two children.  He never spoke of these wartime horrors and it was sixty-five years before he decided to write down his story.  Here are some links where you may read more.  Japanese hell ships  Death Railway  BBC Review

Even after all these years, Mr. Fuquhart feels he needs to eat rice at least three or four times a week.  When I told my husband this, he said, in a soft and thoughtful voice, "For him, rice would represent life"... 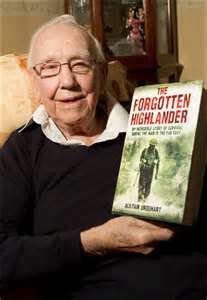 Now, how can someone endure such a horrible experience?  I have read reviews that MUSIC is what saved him.  And I so agree, he speaks of music all through it but I must tell you that it is actually LOVE that saved him.   It was the love of music you see, the love of it and the thought of the love of his wonderful family back home in Scotland.  If you go to the Amazon website for the United Kingdom, you can read a review of his book, which I think is the second review down, and I love that it is written by his daughter!

If anyone in Scotland ever gets to meet Alistair Fuquhart, please shake his hand for me, would you? Pass along my good wishes and let him know that I thought his book was very well written.  It's difficult to think of all this man went through, both during the war and also how much he was tortured by his memories after the war.  Stephen Spielberg has now, I believe, secured the rights to this story, so you should look out for it on the big screen within the next few years.

Alistair Fuquhart, I will not forget you!  I will try my best to let others know of your story.  Leaving you with one of the songs mentioned in the book, "Moonlight Serenade".  Enjoy!