An Eye for Beauty 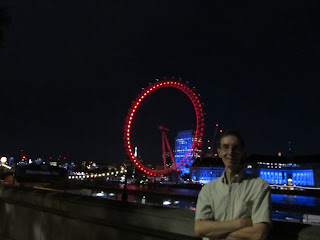 The London Eye!  You know it, of course. It was constructed for the Millennium and was completed in March of 2000.   In 1993, there was a competition to design a landmark for the millennium.  The architects, husband and wife David Marks and Julia Barfield, submitted the design for the London Eye but it was rejected by the judges. They built it anyway!

I took the photo of Richard from the other side of the Thames, showing how it looks at night all lit up. The year that we were there, it changed to different colors.  (The colors can be used to show support, just two nights ago it was lit up yellow and blue, the colors of the flag of Ukraine.)  I think that's wonderful.  From the other two photos here, I think you can see how it looks very different from other observation wheels you might have seen.... 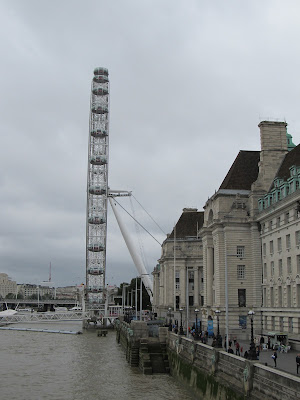 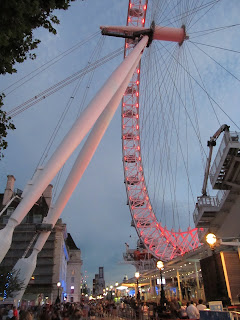 You can see that it is cantilevered or supported on only one side.

If you call it a Ferris Wheel, it won't bother me any! We use words that are familiar to us.  Just across from the London Eye is, I believe, one of the most beautiful buildings I have ever seen...The Houses of Parliament which includes The Elizabeth Tower, which was recently restored.  Once again, The Elizabeth Tower has been called "Big Ben" for many years and we all know that technically, that is the name of the bell inside the tower itself, but if you wish to still say "Big Ben", I will NOT send the language police to your door! Whatever you call it, it is truly lovely. 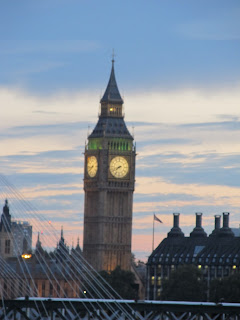 Now, let's cross back over the equally lovely Westminster Bridge and talk about the London Eye again!  Did you know that the London Eye has 32 capsules? Each capsule or pod holds up to 25 people. You might have been on it before and remembered being inside number 33.  This might be true. They are numbered from 1-12 and then from 14-33.  There is no capsule number 13!  When I have been on it, I paid no attention to the number of the capsule, I only had eyes for the views.  It made me think of the song, "On A Clear Day (You Can See Forever).  You have time to marvel since one revolution of the wheel takes 30 minutes.

If you click  here you will see other designs from the Marks Barfield architectural firm.  There is beauty in design! David Marks died in 2017 but the beauty that he created lives on.

Before this old computer crashes, let me try to type a post as quickly as I possibly can...

Well, hey there! How are y'all doing? Have you watched any of the Winter Olympics? There have been some very special moments, I think.  Since I have to go to bed early it means I am finding out results days after everyone else but that's been okay for me, I still enjoy what I have seen.  All those snowy pictures from the Olympics have made me very feel very cold though! And remember when I told you in a post recently about the possibility of getting snowy weather? It never came and for that, I am grateful! Just as soon as see it on TV!  Besides NOT seeing the Olympics, what have I been doing?  Nothing very exciting but you know me, I am always thinking of music and background of songs! On Instagram and TIKTOK there is a song that is really making the rounds. When I first heard those opening chords, I knew exactly what song it was....

There, did you recognize it? (I hope you were able to see the video). Some songs don't age as well as others but this one...I think it still sounds very good today!  Oh dear! I just went back to read this post after I posted it and it WILL NOT SHOW THE VIDEO!!  You should see it
here! (Hopefully).

It is "Love Grows (Where My Rosemary Goes)" by Edison Lighthouse from 1970.  The lead singer is Tony Burrows (a Brit, of course, my posts don't always have to have a Brit involved, it just works out that way!) He was contacted in January of 2022 to inform him that this song had gone viral, he was astonished to learn of its popularity. I have read that it has been used on reels on these social platforms more than 2 billion times! Is that correct? Isn't that something? And what is quite interesting to me is that this same singer had three other songs on the charts at the same time in the first week of January of 1970! The other three are as follows: "United We Stand", "My Baby Loves Loving" and "Gimme Dat Ding".  Oh, that last one is quite funny, he is singing a duet where Tony Burrows sings in a low, gravelly voice and the other singer sings in a high tenor.  Calling themselves "The Pipkins", the other singer is Roger Greenaway, who is also a famous songwriter!  (He wrote "Long Cool Woman In A Black Dress", "I'd Like To Teach the World To Sing" and many others.)  "Gimme Dat Ding" came from a children's musical and the song is meant to represent a piano and a metronome.

The first video from 1970 which I hope you were able to view from the link I gave you, has the band performing in front of a large building with columns.

After seeing it, I believe I recognized that same building in a Poirot episode from the early 1990's that I saw on TV.  It was called the Arnholt Bank but it is the Four Seasons Hotel at Ten Trinity Square in the City of London.  You can see the columns if you click just here.  (Scroll down but enjoy the lovely views of the inside as you go!)   Before it was bought as a luxury hotel, it was the London Port Authority. If you have been to London and visited the Tower of London, you have been very close to this building!  Now....after I have told you all that, it is possible that I could be totally wrong and the building that you see in the video is NOT that same building, but it looks very much like it to me! 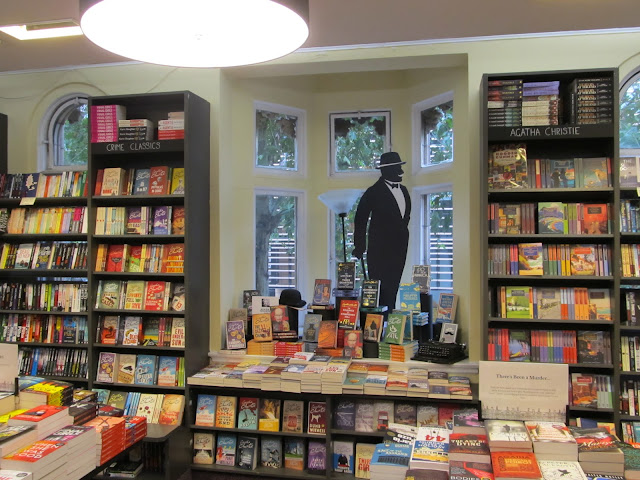 Look at this fantastic display of books by Agatha Christie at the bookstore "Waterstones" which is on Gower Street in Bloomsbury.
(Notice that I have mentioned Gower Street on the post that I have listed on the right of this blog.  Bloomsbury is our stomping ground whenever Richard and I are in London! Not that we have been there lately but still, it is dear and fairly familiar to me.)
Hope you are all doing well and still using your little grey cells, mes amis!
P.S. I am not certain if the singer in the video really is Tony Burrows but he certainly is the singer on the record that I know and remember.
Posted by Kay G. at 5:09 PM 24 comments: