When The Swallows Come Back To Capistrano/St. Joseph's Day


St. Joseph's Day was yesterday, March 19th. (St. Joseph, husband of the Virgin Mary and earthly father of Jesus.)  Years ago, my sister and I were invited to a St. Joseph's Day Altar by a friend of hers who was Italian-American. I have never forgotten it! There were all kinds of lovely food dishes artfully arranged in three tiers with flowers and fruit interspersed beside the dishes. (The top shelf had a statue of St. Joseph).  Reading up on it now, I realize that since St. Joseph's Day is always during the season of Lent, all the food would have been vegetable or fish dishes along with sweet cakes. Some of the dishes would have had breadcrumbs as toppings, these would symbolize sawdust to remind us of St. Joseph, the carpenter.  I really can't say that I remember that fact, but I do remember that it was all very good. We were given a fava bean when we left....

The St. Joseph's Altar came from Sicily.  During the Middle Ages, Sicily suffered from famine. The severe drought ended after the people prayed to St. Joseph. The fava bean is the crop that saved them from starvation and is therefore a traditional part of the St. Joseph's altars.

San Juan Capistrano! It is in California, there is a famous Mission there founded by Spanish Catholics in 1776.  It is well known because of the cliff swallows that return faithfully there very year in March, and it is also on March 19th, same day as St. Joseph's Day! I hope you know the story of the swallows! Father St. John O'Sullivan. who was the pastor of the church during the 1920's noticed a shopkeeper knocking down a nest of birds who were trying to build under the eaves of his shop. When he told Father O'Sullivan what he was doing, Father O'Sullivan said, "Come on swallows, I'll give you shelter.  Come to the mission. There's room enough there for all." The very next day, the swallows did just that and they have been returning to the Mission ever since. Mission San Juan Capistrano - Mission San Juan Capistrano (missionsjc.com)

If you click on that link that I gave you above, you can read more about it!

Of course, there MUST be a song connected with this. (You knew there would be, I know!)  "When The Swallows Come Back to Capistrano" was written by Leon Rene and first recorded by The Ink Spots in 1940. (The Ink Spots featuring Bill Kenny! I have written about them before, you know I love the songs by them!) The most wonderful thing, the Rene Family donated the piano on which Leon Rene composed the tune and the Mission has it displayed in a special room at the Mission honoring the songwriter.

Leon Rene also wrote another song about a bird too! "Rocking Robin"! And I must tell you, robins are more likely to run along than to rock. They are not very good fliers so please be especially careful of robins if you see them in the road. Robins in America are in the thrush family and tend to be a bit bottom heavy. I have observed birds for many years so this is a personal observation of mine!

Today is March 20th, first day of Spring! It is the time when we get to see the male cardinal (bright red) actually feed his mate! Now, I don't have a photo of it here but I promise that they do, just as faithfully as the swallows return to Capistrano, every year.

Happy Spring to you all! 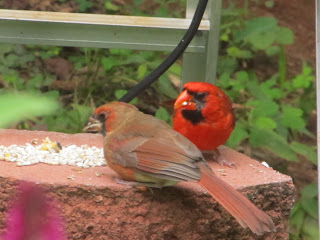 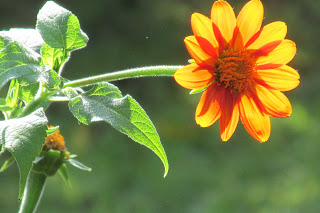 "What can I do to help?"  That is the very first thing that I always hear from a very dear friend whenever I am going through something in my life.  (I am hoping that you all have friends like that!)  There is a company here in the USA that sells rare seeds, Baker Creek Heirloom Seeds. (If any of my friends have received seeds in the mail from me, they are usually from Baker Creek in their black packages.) Last weekend, they announced a fundraiser called "Aid for Ukraine".  You may read more just here.

I read that from Friday noon until Sunday night it raised 1.6 million dollars!  Isn't that something?

There is a video about the founder of Baker Creek Heirloom Seeds, Jere Gettle. You may see it just here.  An amazing story, he started his company with $100 with seeds that he had collected, selling to friends and family.  In the early years, his mother drew the pictures for the cover of his catalogs.  After 2000, the company really grew with Jere Gettle's understanding of the future of the internet and his passion for heirloom seeds.

Heirloom seeds are pollinated by wind or insects. You can save the seeds and they will be the same year after year. Heirloom seeds are NON GMO. GMO means genetically modified organism where the DNA has been artificially altered in a lab. If you click on that link that I gave you for the video it is explained in much more detail.

I come from a long line of farmers.  My father and grandfather and their fathers before them, they all knew how to grow a garden. How I hope I inherited that gardening gene! I am very grateful and proud of Jere Gettle and the good work that he has done for spreading the word about heirloom seeds.  I noticed that in the comment about the video that no one mentioned about all the humanitarian work that Jere Gettle has done through his company.  There are still people in this world who do a lot of very good things but no one ever hears about them.  "What can I do to help?", they say and then, they get about helping in whatever way that they can.

More power to them, I say.

This photo is from the summer of 2011. All grown by my Daddy who also was an expert at canning his homegrown vegetables. The taste? Out of this world! 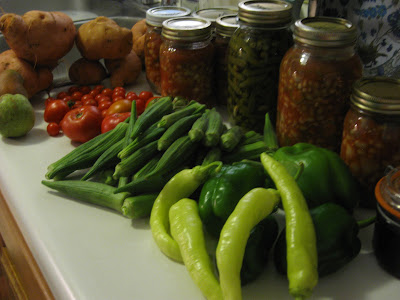 And after my last post, I saw a comment by a German artist who lives in London, Lothar Goetz.  He spoke of the unspeakable aggression against Ukraine and then used blue and yellow in a painting.  He said this: "Colours in a flag are mainly of a symbolic nature but I believe in the power of colour and blue and yellow are both beautiful and strong!" 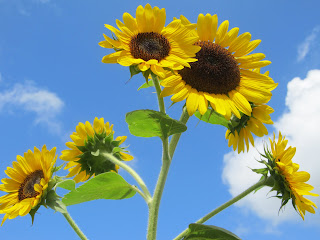