Doris Day and Dog in Sunbeam

Doris Day released a new album a couple of months ago in the UK.  Incredibly, it debuted at number nine on the Bilboard charts.  She is now 87 years old and  made history by being the oldest artist ever to enter the U.K. top ten with new material.  (Vera Lynn released an album a few years ago at the age of 92, but her album was of previously recorded songs.  And please understand, this is just to set the record straight, I have great admiration for both of these women.)  The new album is called "My Heart" and should be released in the US very soon.   This song that I found on Youtube is more well known as the song from the TV show "Coupling", but I love to hear Doris Day sing it! (This is not on her new album, but I like it, so that's why it is here.)

Just by looking at Doris Day, you might think that she has had a sunny, happy life with no heartaches. That simply isn't true. She has been married four times and one of her husbands, Marty Melcher, squandered away much of her earnings, which forced her into doing a TV show in the 70's. Her only child, Terry Melcher, died in 2004 of skin cancer.  She has worked tirelessly for many years trying to help stray animals in America and the proceeds from the album will go to her Doris Day Animal Foundation.

Tonight, on the news there was a moving report on ABC news about a young American soldier who had been photographed with puppies the night before he had been killed.  The family worked hard to get one of the puppies so as to remember their son.  As the ABC news reporter was interviewing the family, the dog walked out into the backyard and suddenly, a sunbeam shone straight down onto the dog. What a beautiful thing to capture! 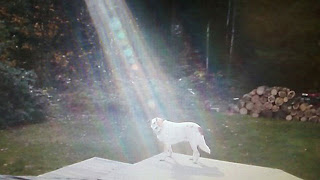 Is the world too cynical for Doris Day and a dog that can bring comfort to a grieving family?  Happily, not yet!
Posted by Kay G. at 9:18 PM