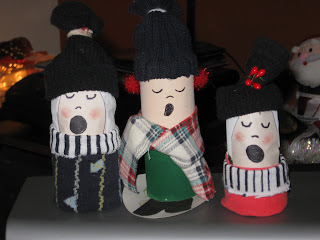 After leaving church on Sunday, I turned on the radio and the song that I heard rhymed "Jesus was born" with "Santa Claus and popcorn".  Oh well, from the sublime to the ridiculous!  For me, some of the Christmas music is just horrible to listen to with even the simplest of songs with trills and runs.  Right now I like to listen to the music from the Nutcracker Suite and the music from a Charlie Brown Christmas. That really is the perfect music for Advent, not really Christmas , so you can't have the carols yet!  The music from Charlie Brown, how new and different was that in the 60's!  It was like a breath of fresh air and I still love it after all these years.  I never tire of the music from the Nutcracker.  I have seen it in Atlanta several times, but it isn't necessary for me to see the ballet to enjoy the music.

Everyone has favorite Christmas movies that they like to see and there are some really good ones.  ("It's A Wonderful Life" is one of my absolute FAVORITES with such great acting.  I think I may know that one by heart!)  In the early 70's, I saw that the movie "Scrooge " was coming on TV and I asked my Dad if he would sit and watch it with me.   I do believe that it is the ONLY time I have ever watched an entire movie with him.  He watched every minute of it and after it was over and I asked him if he liked it, he looked at me with his arms folded and said this one word:  "GOOD".  It was so funny, but he said it with such conviction, he didn't have to really say anything else.  That's my Dad!

The carolers in the photo are made from toilet rolls (or bog rolls in England!) and the middle one was made by my son when he was about seven years old.  I made the other two myself last year just to keep that other one company. Isn't it funny that the middle one is the best one?  That's my boy!