The Mystery Of Lewis Carroll 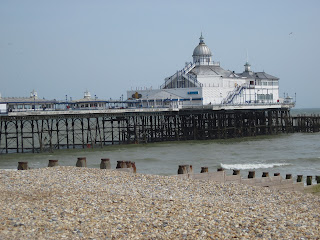 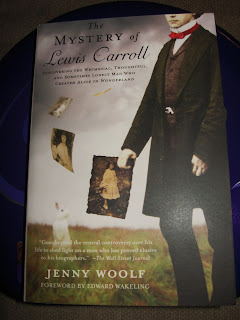 After finishing this book, The Mystery of Lewis Carroll by Jenny Woolf, I asked myself,  Why did the author choose this title? Why not just call it Lewis Carroll and be done with it?  I think that it may be because even with as much knowledge as the author has uncovered about him, I still think that Lewis Carroll is a mystery to her even now...

His real name was Charles Lutwidge Dodgson. We all know that he wrote "Alice's Adventures In Wonderland" and he is quite famous for having done so.  He never married and had no children. He  did not become the anglican vicar that he was expected to be.  Seemingly got on better with children than with adults and suffered with what some may call a stammer or a hesitation when speaking.  He  particularly liked being around little girls and photographed many of them, but still maintained these friendships even as they were adults.  Lived and taught Mathematics in Oxford and enjoyed spending many of his summers in Eastbourne, on the southeast coast of England. Lewis Carroll became quite  particular in his very structured and orderly life.  The bare facts of his life are there for anyone to read  but when you go deeper into his life story, many things are simply mystifying.

One of the earlier biographies of Lewis Carroll is by Florence Becker Lennon, an American.  Many of the misconceptions of the life of Lewis Carroll have come from this book.  May I share a quote about her from Jenny Woolf?  "She was also American, and did not fully understand British social attitudes of Carroll's day".   You might think that I would be offended by that but I agree with her and I understand exactly what she means.
Jenny Woolf was able to view his bank accounts from 1856 to 1900. (And her account of being able to do this is extraordinary!)  I remember reading once, " show me what a man spends his money on, and I can tell you what kind of man he is".  I loved the quote from Lewis Carroll that he wished to put his money towards "him that hath no helper".  So, it appeared that he gave to different charities that perhaps were not as well known as others.

I think that it might be possible that his life may be understood better if it might be considered that he  might have been on the Autism Spectrum.  The symptoms vary but in general, they fall into three areas:
1.  Social impairment
2. Communication difficulties
3. Repetitive behaviors

I made so many notes as I read this book, and after looking over all that I had written and then going back to re-read the passages that I had noted to read again. ( I never mark in any book!) , I kept coming to the same conclusion that Lewis Carroll was a very high functioning autistic person and I just wish that someone could have understood and explained all of this to him at the time.  Of course, I could just be totally wrong and be completely off the mark, but read this book and keep these observations in mind and see if you don't agree.    After reading this book,  I quite liked and admired Lewis Carroll but I couldn't help but feel that he had a sad and lonely life and that people didn't really understand him.  I really just wanted to go back in time and shake his hand and say "sorry" and to wish him well.  In a sense, I feel that Jenny Woolf with this book, did that for me...


Oh, and that first photo is of the pier at Eastbourne.  I love the idea of Lewis Carroll walking along the seafront and then up to Beachy Head.  It is a beautiful spot and it pleases me that he enjoyed the walks during his summers there.
Posted by Kay G. at 5:21 PM