Today is the birthday of one of my favorite actors, Alan Rickman.  Most people  recognize him from the Harry Potter movies as Severus Snape.  He is also well known as the villian from Robin Hood, the one with Kevin Costner from the early 90's.  We loved him in the movie, Galaxy Quest,  PLEASE  watch that movie if you can, it is so funny!  I have found a short clip of Alan Rickman from Galaxy Quest.  Also, I hope you like the clip of Severus Snape with the music playing quietly. It is almost like a silent movie, you can see the expressiveness of his face.   Of course, you really want to make sure you see Alan Rickman in a speaking role because of that voice!  It is magnificent! 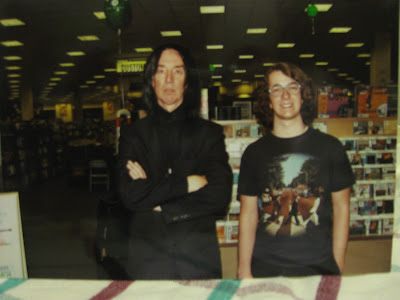 When the Harry Potter books would come out at midnight here, the bookstores would have a party and people would sometimes dress up as characters from the book.  Our son loved all the Harry Potter books...he really is almost the same age as Daniel Radcliffe, the actor who portrayed Harry Potter.  We always made sure we took him to those book parties! (A party to celebrate a book, you know I had to be there too, right?)  Richard decided that if he put on a Halloween wig and sewed some extra buttons on his old black jacket, how close would he look to Severus Snape?   What do you think?  And hey, guess what, Richard has a magnificent voice too!

Happy Birthday, Alan Rickman, I wish you many happy returns of the day!
Posted by Kay G. at 9:23 PM