In the 1950's,  Florida was rapidly being developed as more and more Americans took vacations to Florida,  fell in love with it and wanted to move there.  Plans were made to develop the northernmost of the Florida Keys (which are ancient coral reef islands).  These plans included the dredging of 8000 acres of bay bottom to create a jetport.  Bridges, roads and buildings were all in the beginning stages.   Everything looked very much the way that the rest of Florida was being developed but something wonderful happened, something that so rarely does happen.   A small group of people worked against this development and wanted these keys and the water around them to be a haven for wildlife and a place of nature for people to enjoy.  (One of them, Herbert Hoover, Jr., the vacuum cleaner magnate, brought delegates from Washington, D.C. and took them over the islands in a blimp, absolutely convinced that if they saw the beauty of it, they would be on his side to save them.)  The wonder of it all...the ones who wished to save it, actually prevailed and it is now and has been since 1968, Biscayne National Park. 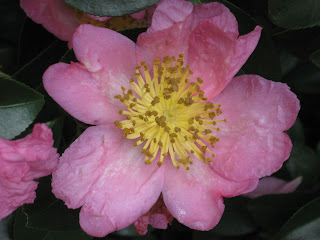 What does my title, "Spite Highway" have to do with this story?    As a last ditch effort to stop this park from happening, the developers brought in bulldozers and cut a road right down the middle of one of the keys.  It was on Elliott Key and it was 6 lanes wide and 7 miles long.   It became known as "Spite Highway".   It did no good: the plans for the park went ahead anyway and President Lyndon Johnson signed it into law and it became the beautiful national park it is today.  The Spite highway?  It is all overgrown by trees and has become a popular walking trail.  The image of that road stays with me, it was meant for spite but has become something good.
You really can't stop meaness and cruelty and greed in the world, you can only do your best and try to make it into something better.  It pleases me greatly to read of this small group of people behind this national park and that those who built the Spite highway were defeated.
Posted by Kay G. at 6:27 AM