It's been 100 years since Britain has been buying and collecting historic buildings and sites and opening them to the public. There is a really interesting video regarding this that I found on the BBC.  It is seven minutes long but it is like a little movie, it is so well put together.  I love the content, the photography and I even love the background music. You may find the clip just here.

It is incredible that one of the more recently preserved buildings is a barn which is very close to a runway at London's Heathrow Airport! It is so beautifully built that is like a church.  John Betjeman even likened it to a cathedral.
I was most excited to see the photos of  the Rievaulx Abbey in North Yorkshire.   I have never been to Yorkshire but I recognize the ruins of the Abbey from reading the books by James Herriot.  The changes that they are making to the area around Stonehenge are exciting to me, make sure you watch this video just so you can see what they are doing! (Never been there either, but it is on my list, along with Salisbury Cathedral which is not too far away from Stonehenge.)

The interesting story about Lord Curzon taking back the fireplaces and having the Union Jack proudly displayed upon the horse-drawn cart is such a good one!  I had to look further and see who would have bought them from such a beautiful old house and I am afraid that it was a group of American business men!  Oops!  Oh well, Lord Curzon bought them back from them anyway and for good measure, he guarded the ports to make sure they didn't secretly spirit them away! 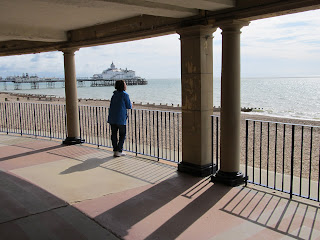 Hey! Did you know that they just filmed an episode of Antiques Road Show at the Bandstand in Eastbourne today?  I really enjoy watching the British Antiques Roadshow as frequently the location is just as fascinating as some of the antiques. This is a picture of me standing on the lower level of the Bandstand. (Gee, it sure was hard balancing that pier on top of my head! HA!)
So, make sure you look out for that show on PBS, it might make it here in about 2 or 3 years!
We get things years later and I will ask my English in-laws about a TV show and they have to search their memories since they wouldn't have seen the show in years!
If any of you see this little 7 minute movie from the BBC that I told you about, let me know what you think!
Posted by Kay G. at 9:32 PM