Do you notice from my profile that I was born in Toccoa, Georgia?  That is also where my Daddy was born, in 1927!  I just got off the phone talking with him.  He was happy because he had won a drawing from his local radio station in Bostwick, Georgia.  (He really enjoys listening to the "Professor of Useless Knowledge" who has a popular morning show.  Hmmm....I wonder if my Dad and I have something in common?) Anyway, as we were watching the Braves game on TV, we got to talking (as we always do) and he reminded me that one for the first things that he bought from his earnings from his first job was a radio.  When he was 15 years old, he walked four miles on the recommendation of his sister's boyfriend to Camp Toccoa, and poured concrete for the sidewalks and catch basins.  (This would have been done in the wintertime as he would have had to help out with the farming any other time of the year.)  He said that you were either assigned a pick or a shovel. On his first day, he was given a pick.  With the pick, you were expected to hit the hard ground and break it up for those with a shovel to remove the dirt.  It was very hard work breaking up that ground.   He asked the man in charge, "How do I get a shovel?"  He was told, "You have to be the first in line.".  After that, he made sure he got there before anyone else !  Don't think that he didn't work hard though!  My Dad made 45 cents per hour and the adult who had told him about this job only made 40 cents an hour.  When the older man questioned why this young boy was making more money, he was told, "Because he works harder, that's why!"  That's my Dad for you!
Toccoa has a Military Museum devoted to all of those who trained at Camp Toccoa.  They were able to get one of the stables from Aldbourne, England where the men lived for a brief time after they were shipped out from Toccoa. (They lived in these huts before and after the Normandy Invasion.)  It was dismantled and sent to Toccoa and is part of the Military Museum. If you read the book "Band of Brothers" by Stephen Ambrose, you should already know all about the camp.  (It was made into an excellent mini-series TV show in 2001. It gives me a thrill to know that my Dad built the sidewalks that Dick Winters walked upon!  Click on his name if you are not familiar with "Band of Brothers". )
Camp Toccoa was built at the base of Currahee Mountain.  Currahee is a Cherokee word which means "Stand Alone", the mountain is quite high compared to the surrounding countryside The paratroopers who were sent into enemy lines were the first ones to be sent in, and therefore, that was their motto, "Currahee... We Stand Alone."

My Dad was drafted just after his 18th birthday and the war ended while he was in training camp.  He was sent to Berlin and I have written of his memories from an earlier post.  You may read that post here!   There is a Currahee Military Weekend that is held the first October every year and my Dad and I are hoping to attend it this year.  If not, then we hope to visit the Military Museum which is in the train depot in Toccoa.  If we go, I hope that we can get a John Sosebee hot dog in the little cafe in town called....oh, I know right where it is, but I can't remember the name of the place.  I need to call my Dad back, HE would remember the name!! 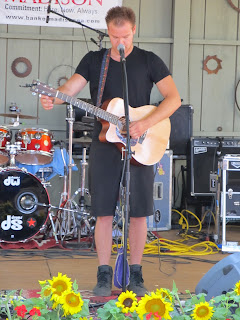 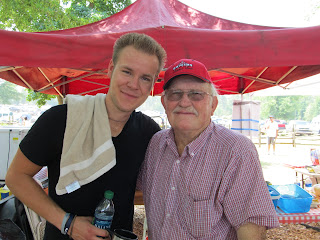 Here is a photo of my Dad posing with Corey Durkin, one of the singers at the Sunflower Festival in Rutledge, from last summer on one of the HOTTEST days ever!  When I was looking at some of the craft booths, he told me, "If we get separated, I'll be where the music is."  That's Daddy for you!
Posted by Kay G. at 11:03 PM