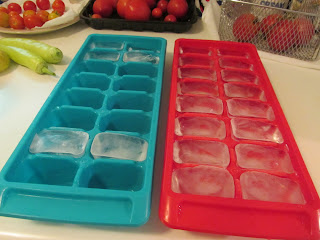 Ice cubes! We might be the only ones who still use ice cube trays. When I was a kid, the ones that we had were the metal kind. Remember? You pulled up on a lever and bits of ice would fly all over the place? (Maybe I was just too little and didn't know how to do it but that is my memory.) Somewhere along the way, these plastic kind came out and those were much easier to use.  Guess what I just learned?  You know I am always fascinated to learn the history behind inventions. (Even ice trays, you are thinking? Yes, even that!) I hope you remember the singer, Linda Ronstadt? Well, it was her grandfather who came up with using plastic for ice cubes trays! It is called the flexible ice cube tray and his name was Lloyd Groff Copeman. He had over 700 patents to his name! You may read more about him just here! He noticed that he went on a walk on a wintry day and the ice just fell off of his rubber boots...that was the idea behind his invention!

So, you see...you don't have come up with something brand new, just something that is out there and can be improved upon. ( Now, I do know that the majority of people use the ice makers that come in their fridges but ours stopped working years ago!) Now, let's just talk a bit about color, shall we?  For years, I used plain white ice cube trays.  They were perfectly adequate but when I saw that bright red and the bright (what color would you say...teal, dark turquoise?) I knew I had to have them both! Those two colors together just make my heart sing! (I truly do have a thing about color.  By the way, the cherry tomatoes and banana peppers that you see on the counter behind the ice cube trays are also very colourful (there, don't underline it and tell me I am wrong, the Brits spell it that way!) That bright red and light green together...I do so wish I could paint them! (Of course, I would then eat them! So wonderful when you grow them yourself!) 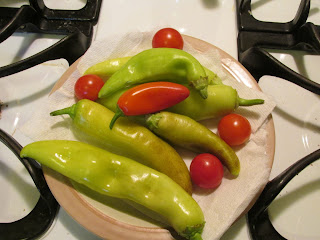 What song? A Linda Ronstadt one, of course! HEAT WAVE!

That's a good one to think about when you are talking ice cubes, right? Take care everyone and remember to appreciate all the little things in life!

Oh okay, you know you want one more...COLD AS ICE!