I have written of my admiration for Louis Zamperini before.  When I read his book, "Devil At My Heels" in 2004, I wrote a letter to the publisher and asked if they could let him know how much I admired him. His story of survival, imprisonment and then, forgiveness is one that I think everyone should know.  To my surprise, I received a personal letter from Mr. Zamperini! (If you read anything about him, you will know that he personally answered every single letter that he received, until his ill health in his later years forced him to stop. And even then, he had one of his fellow Olympic buddies to answer those letters. What an extraordinary guy!)  When Laura Hillenbrand wrote her book about him which she entitled "Unbroken", I was thrilled that so many more would know his story.  When the movie was made from that book, I was pleased to hear it.  Only...the movie didn't have anything to say at all about Louis Zamperini's life AFTER World War II and there was so much more!   So, I am pleased to tell you that there will be a new film that will be released in September of this year, so please look out for it!  Will Graham, the grandson of the  preacher, Billy Graham who just died recently, will play the part of his grandfather in this film.
(If you remember, Louis Zamperini went to see Billy Graham, at the urging of his wife Cynthia, in Los Angeles, in the very early days of Billy Graham's revivals, when he held his meetings in a small tent.  Mr. Zamperini turned his life around and spent the rest of his long life speaking of forgiveness through the love of Christ.)

Now, from the trailer of this film, I am very much surprised at how much the actors remind me of Louis and Cynthia.  Listen at me, you would think that I knew them but honestly, there are photos of them both in "Devil At My Heels" and I have a thing for faces so...trust me, they do look like them! (Not exactly, of course, but I would be interested to see if Mr. Zamperini's family agrees with me.) 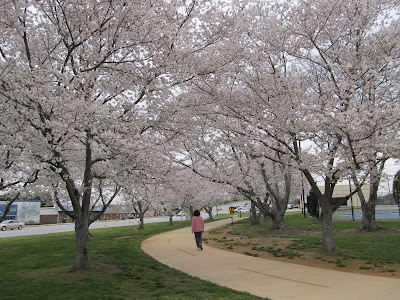 Hope you all are doing well these days, my friends! For me, it has been an unusually busy time in my life but hey, as long as I have some blue sky and blossoms, I am okay.
Take care!