Chattanooga, Tennessee!  Richard and I just visited in the month of September, and you know I have some photos to show you.  It is commonly called "Nooga" because honestly, that is a long word to type...C H A T T A N O O G A !
This was the view from our hotel room.  I loved this so much! 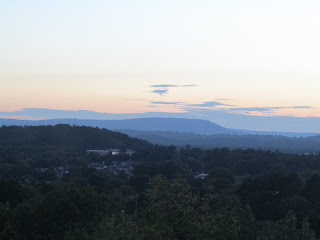 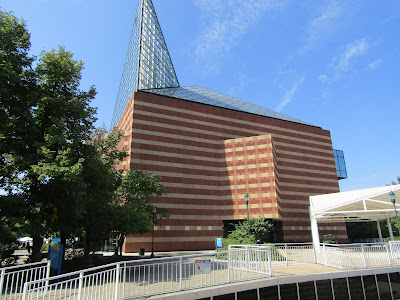 This very modern building is the Tennessee Aquarium and is well worth a visit! It is right beside the Tennessee River.  We took our son there when he was only 3 years old and the area around it has grown so much in those 30 years!
Several bridges cross the river in Chattanooga. The one pictured below is the Market Street bridge. Look at that lovely blue paint! There are cars crossing on that bridge along with pedestrians. 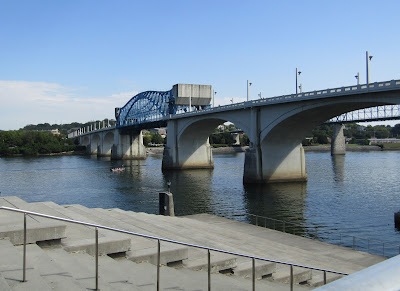 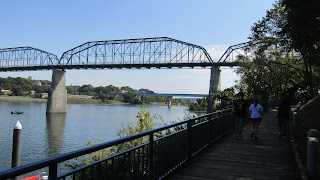 The Walnut Street bridge is pictured above. Also called the John Ross bridge, it is a truss bridge and was built in 1890. It is now totally for pedestrians and bikes! No cars allowed! Isn't that great! I remember seeing it when we took our son there in the early 1990's and it was all rusty brown. Apparently, it was destined to be TORN DOWN! Can you believe it? A group of like-minded citizens got together and saved it. Along with the Aquarium, it is a jewel of the city. It is one of the longest pedestrian bridges in the country. Did I walk across it? You know I did! Richard and I both did!  It is 2,375 feet across, and we totally enjoyed every step of the way. 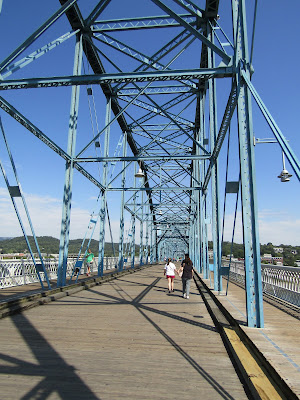 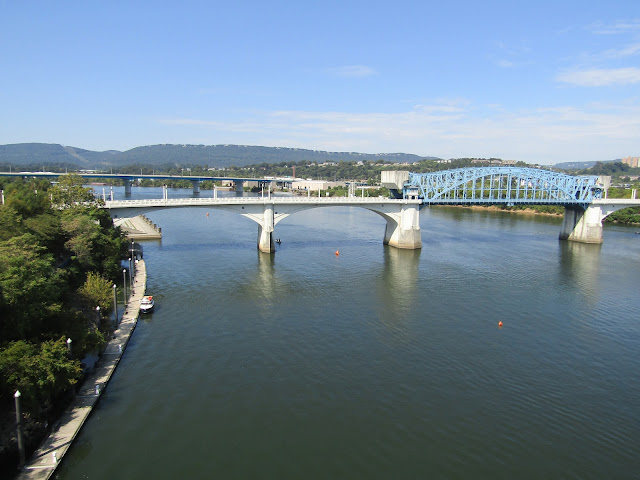 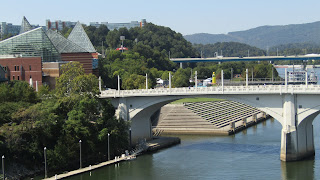 These two photos show views from the bridge. Can you recognize the Tennessee Aquarium at the far left of photo? 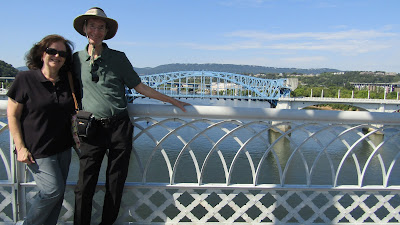 On the other side of the bridge there is a lovely park with beautiful fountains. The sculptured animals are made in such a way that children can actually climb upon them. The building behind the fountains has a beautiful carousel inside it.  Had it not been such a gorgeous day, I would have ridden on it, seemed a shame to go indoors even for just a bit!
Next time I am there, I think those pretty painted horses will be seeing me! LOL! 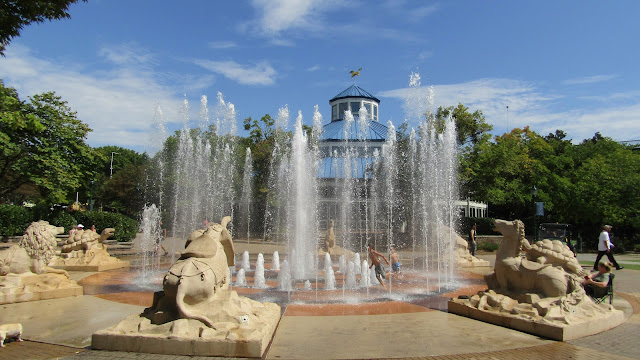 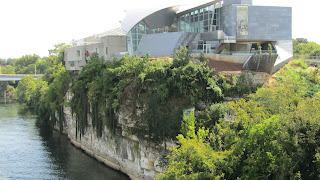 Crossing back across the bridge, this is the view of the Hunter Museum. It is a lovely building built upon a bluff overlooking the river. (We didn't have time to visit there but hopefully we will next time!) 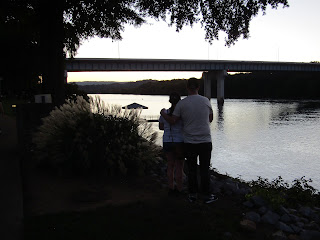 The Chattanooga Riverwalk extends for 16.1 miles along the southern banks of the Tennessee river. (Yes, I typed that correctly! Over 16 miles!!) There are lovely spots to enjoy the sunsets. 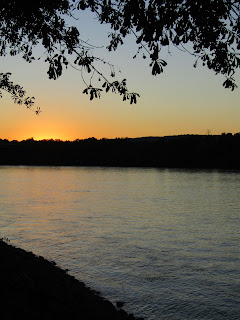 I just heard that Loretta Lynn died today. She was 90 years old. I've told you before how much I loved the film based upon her autobiography, "Coal Miner's Daughter"! It was one of my Daddy's favorite films too.   Loretta Lynn wrote most of own songs but one that was a big hit for her was the song "One's On The Way". It was written by Shel Silverstein,  the same man who wrote "A Boy Named Sue" for Johnny Cash.
"
Take care, my friends!  Enjoy "ever" single day! (That is how Lorretta Lynn said "every", just like my Daddy.)
Posted by Kay G. at 6:12 PM