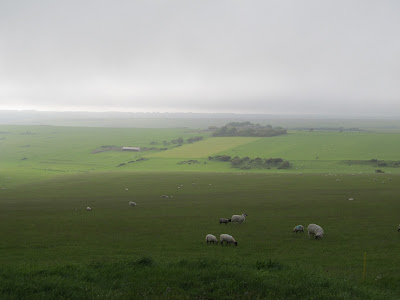 Doesn't that photo of Richard's above look dreamy?  It is of the South Downs near Eastbourne in England.   There is a British artist that might not be known to you who painted this same landscape in beautiful watercolors, his name is Eric Ravilious. Born in London in 1903, his family moved to Eastbourne where his parents owned an antiques shop.  Eric Ravilious attended school at Eastbourne School of Art and also attended the Royal College of Art. Besides being an artist, he was also a teacher. In 1930, he married one of his art students, Tirzah Garwood. They had three children. (Just reading about them, the entire family seem such talented, interesting people! You may read more about his wife just  here!) Sadly, Eric died on September 2, 1942 during active service when his plane was lost near Iceland and was therefore the first British war artist to die in WW2.   He was only 39 years old.

Wouldn't it be wonderful if someone made a film about him?  Someone has! It is called "Eric Ravilious: Drawn To War" and I just learned that it has been nominated for a BAFTA!  It is my understanding that the movie will be released in the USA but not until Autumn of this year so...keep an eye out for it! Not sure how many theatres will have the film but I would drive many miles to see it!

The Towner Art Gallery in Eastbourne has a permanent collection of his paintings.  I have the link for you here.

Before you look at some of his paintings, let me leave you with quote from The Sunday Times from 1939....

"He managed to make every subject he painted to appear as something magic, almost mystic, distilled out of the ordinary everyday".

Just because this is such a lovely, dreamy song (I have been humming it all week), "Only The Lonely" by Chris Isaac. It was a huge hit for Roy Orbison who was also the songwriter.)

Hope you are all doing well, my friends!  Seems like it is boiling hot all over the world! Y'all need to go back and read my post about air conditioning. Thank you, Mr. Carrier!