Memories of June and ELVIS

July is almost here, ready for the sunflowers?
I am showing you a photo of the very small sunflowers from July of 2016 when we had a severe drought here in Georgia. Funny thing, this photo caught my eye because I went for a walk just this morning and I wore this exact same t-shirt! (As long as my clothes don't fall apart, I wear them forever.)  You can't see it but on front of the shirt there is a map of the United States with each state being spelled out.  (I think they had to cram in Massachusetts and Mississippi a bit! LOL.)
I am a cartophile.  Are you one too?  Cartophile is a person with an interest in maps!
My son is the same...as a child he asked about getting a world map.  At the time that I looked into it, all the ones that I found were a bit expensive so what did I do? Found a plastic shower curtain with the world map upon it!  Whenever he asked about a place in the world, I told him to go and "look it up on the shower curtain!".  (This was in the days before the internet. Now you can look up anything.) I know y'all must be terribly impressed by my parenting skills!  Okay, fast forward a few years...after he had grown up and moved out, his old room is still the same for when he visits but it has a nice world map upon on the wall!  Hey, better late than never! 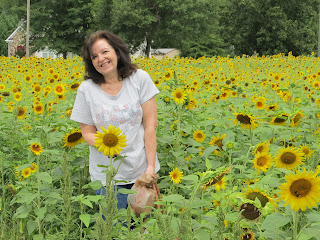 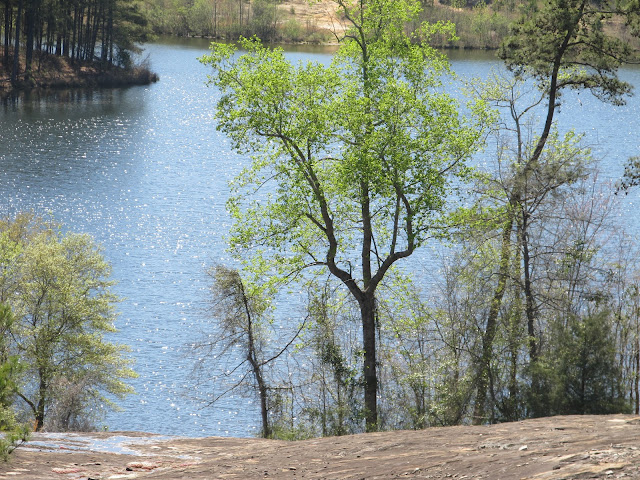 Now, this photo was from April of 2017, and it is from Stone Mountain.  Isn't it nice to see the sparkling blue lake and the spring green of the leaves?  Richard's photos are always so good, don't you think? 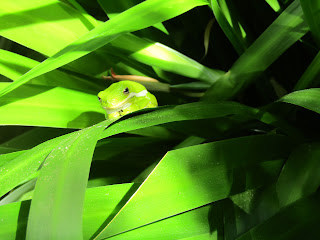 The green tree frog photo is from this year, he was in our irises on our front porch. I hope he was trying to get some of the mosquitoes that like to hang out there! Isn't he just the cutest thing?
As I told you in my last post, we did have some incredible heat in Georgia in June (it was the same in many parts of the country) but thankfully, we had a few spells of rain which cooled things down a wee bit. THANK goodness!  I really was saying "bring me shade".
It's funny to try to park your car in the parking lots...everyone tries to get their car under some kind of shade tree, they are the first spaces to go!
___________________________________________________________________
I was able to see the Elvis film! Even with the woman behind me with the LOUDEST cough on Earth and the man beside me who used the smelliest cologne in the Universe, I managed to enjoy the movie.  I have some criticisms about it, of course. Still, it is well worth seeing just for the performance of Austin Butler playing Elvis. It truly is extraordinary. I truly love Tom Hanks but for him to play Col. Parker.... Best for me to not truly say what I think sometimes.  I wonder what one of my favorite directors could have done with it...and that would be Michael Apted! Sadly, we will never know, since Mr. Apted is no longer with us. (If you remember he did the wonderful film , "Coal Miner's Daughter".) He totally understood Loretta Lynn being from the South, I suspect that he might have "gotten" Elvis too! Still, I am glad that this film was made. For one thing, it might make people see Elvis as a real person and not just an "icon" which if I hear that word just ONE more time....!!!!    I can't think the last time I went to a theatre to see a film...okay, just got my husband to help me remember and it was February in 2020! Hope the summer is going well for you all!
And thank you, thank you very much! OH! And I forgot to say...I couldn't help but be thankful that when they portrayed the '68 TV special, I didn't have to be told about it, I already saw it- in 1968! And I LOVED it!