If you know the British comedy duo of Morecombe & Wise, then you should recognize their theme song of "Bring Me Sunshine".  My English in-laws had a very nice couple who were their friends and neighbors who actually knew Eric Morecombe and Ernie Wise and they told us that were just as marvelous a pair as you could possibly imagine.  (I've mentioned before to you that I truly don't care how famous a person might be, it is the character that matters the most to me.) Now, I have found a video of them dancing to "Bring Me Sunshine" and I do hope that you will watch it and please, watch it all the way to the end!  (They remind me a bit of Laurel and Hardy, you all must know that I am big fan of them!)

The song was written in 1966 but it was adopted as the theme tune for "Morecombe & Wise" in 1969.  Willie Nelson did a version of it in late 1968 and it reached #16 in the Country Charts in 1969. (Imagine this passing for country music these days!) Of course, Willie Nelson has always been a songwriter, singer and musician who goes his own way. "Great music is great music" is his quote from his famous "Stardust" album from 1978.  (I might tell you more about that album on another post!)

For now, here is Willie singing the song....

There, you MUST be singing or humming or whistling it by now!

These days, I might be changing the lyrics a bit for Georgia and saying, "bring me SHADE"!  It is expected to be in the 90's this week and with humidity, it will feel like 107 degrees...and of course, that's measured in the shade! Still, we have had some very pretty days with temps in the low 80's and a cool breeze.  It has been very nice weather and most enjoyable for our flowers.  And the high temps mean that our birds will very much like their bird baths to be clean and ready for them. You know they will be!

A very wet Towhee!  And by the way, this bird is called a towhee, because that is the call that it makes...Tow-WHEEE".  And I am also happy to say that it also says..."Rich...ARD".  That is what it sounds like to us anyway!  It took years for us to learn that this particular bird had that call. We saw it on a branch of a tree at Panola Mountain State Park and it looked right at us and called Richard's name. It was like discovering gold! 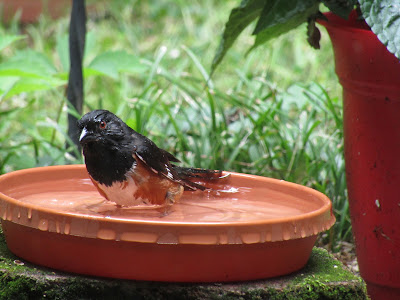 On the topic of not knowing things...we have enjoyed this particular flower at Panola State Park (it blooms along one of the trails there) and we really are not sure of its name. (We think it is some type of native sunflower but other than that.... we love it all the same.) 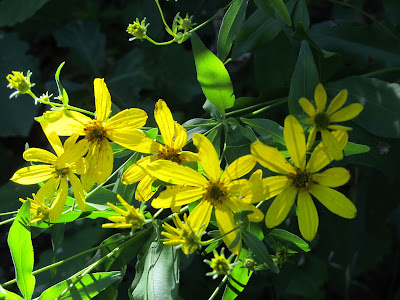