Is It Getting Hot? Turn On That AC!

There, I typed "AC" but in real life, I always say "air conditioning", honest, I do! I live in Georgia and let me tell you folks, it gets HOT in Georgia! Here's the thing about air conditioning, like so many things we take it for granted.  We just switch it on when it gets hot, we expect it to be in all buildings and vehicles and if it breaks, we plead with the repairman to come out and fix it! (Maybe you don't, but I do!) Now, how many of you know who invented it? Anybody?  Ha! Maybe you all know and I am the last one to find out but that won't stop me from telling you about Mr. Willis Haviland Carrier and his wonderful invention...

Willis Haviland Carrier was an American engineer born in Angola, New York on Nov. 26, 1876. He graduated from Angola Academy in 1894 and from Buffalo High School in 1897. He then attended Cornell University and graduated with a Master of Engineering degree in 1901.  Alright, got those dates in mind? Now, I am going to tell you that in the summer of 1902, a publishing company was having great difficulties with the humidity and heat in Brooklyn, New York. The paper to be used in printing would grow and shrink in the humidity.  Mr, Carrier to the rescue! He submitted drawings for what would become the first modern air conditioning system. We may think of it as just cooling the air, but it must do these four things:

After more refinement, Mr. Carrier was granted a patent for his invention in 1906. (He called it "an apparatus for treating air".)   He received another patent in 1907 for the "law of constant dewpoint depression".  I have read that he stepped off a train station in the early morning in a dense fog and that started his mind turning! He learned that getting rid of the humidity was the way to cool the air. The key was to dry the air by producing artificial fog.

The first use of his air conditioning was for businesses such as the publishing company that I told you about. The first building to be air conditioned just for comfort was the New York Stock Exchange Building in NYC which was also in 1902. The first time that it was used in a home was in 1926.   The following video explains how it is used in the Sistine Chapel, "The Art of the Invisible"....

Fast forward to the early 1960's in Georgia...which was MY childhood.  I well remember stepping into a drugstore with my Daddy and the cold air that blasted out as I crossed over the threshold is something I will never forget! "What is that?!", I remember asking him.  "Tee, hee, hee....THAT is air conditioning!", he replied.  Ah, don't worry, it didn't take me long to get used to it and I didn't want to leave! It was so lovely and cool and you know I sat at a counter and had a Cherry Coke before we left! (With a paper straw, of course!) We didn't have air conditioning in our homes or schools.  I don't think that came as a standard thing until the late 1970s.  I have tried to explain to our son that things like watermelon and ice cream were such an important part of summer for us, they were cooling and very, very welcome in the Georgia heat!

THEIR RELATION TO THE PROBLEMS OF METEOROLOGY AND OF AIR CONDITIONING

In many industries such as the manufacture of textiles, food products, high explosives, photographic films, tobacco, etc., regulation of the humidity of the atmosphere is of great importance. This paper deals with the subject of the artificial regulation of atmospheric moisture, technically known as air conditioning. It gives a theoretical discussion of the subject in which formulae are developed for the solution of problems. These formulae are based upon the most recently determined data and in order to establish a logical basis for the presentation of these data and the derivation of the formulae, the principles governing atmospheric moisture are reviewed and the present methods of determining atmospheric humidity are discussed.

Most of the dogwood trees have now lost their blossoms and underneath them you may see a carpet of white petals.  If you ever find yourself underneath one on a sunny day, make sure you take a photo. I asked Richard to do so and here it is!

Hope you are all doing well these days, my friends!

And next time you find yourself on a foggy day, think of our hero, Mr. Carrier and how grateful we all are for his invention. 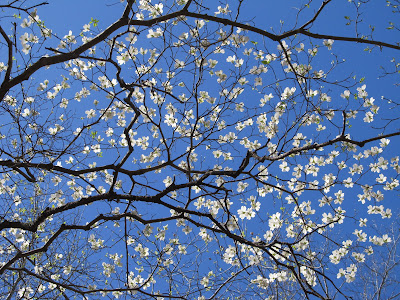