Graeme Edge was one of the original founders of The Moody Blues and he passed away this week at the age of 80. It was my pleasure to see the Moody Blues in concert several times in my life! (Once, we went to see them with our son when he was very young and I used my blue eye pencil to write "Moody Blues" on his little cheek, like from the hippie days of the 70's! I'm glad I did too because we met a couple from Alabama who noticed this and we got to talking with them. We kept in touch and they were able to get us tickets to see the Moody Blues when they toured in Birmingham, Alabama!)

So, you see my whole family are big fans of the Moody Blues and we are sad that we have now lost the drummer, Graeme Edge. And we were equally saddened to learn of the passing of Ray Thomas, the marvelous flute player in 2018.

Graeme Edge was not only the drummer for The Moody Blues but also, he wrote many of the poems that are recited along with the songs. ("Cold hearted orb that rules the night, removes the colors from our sight. Red is gray and yellow white but we decide which is right and which is an illusion".) It was Mike Pinder who recited the poem "Late Lament" on the album but in concerts, Graeme Edge read his own words on stage and it is his voice that I well remember.

As you all know, I am fascinated by music and those who bring it to us! Graeme Edge's mother was a classically trained pianist who played the piano for silent films. And he also had a grandfather and great grandfather who performed in Music Halls. (If you are American like me, you might not really understand the Music Halls in England...I only know of them because of my husband and from following Chas & Dave for many years!) The Music Halls began in Victorian times in London and oh here, I have a link for you... The Great British Music Hall - Historic UK (historic-uk.com)

You know I think it is well worth reading!

My Cosmos flowers that I planted from seed didn't begin to bloom until mid October and they are still blooming! Wish me luck, we are expected to have a killing frost on Sunday night.  If I put a giant garbage can over them and wrap a towel around the bottom of the garbage can, will that save them? How about if I put my tomato wire cages over them and then put a plastic sheet over that? Not sure...I hope I can just keep them going a bit longer, they are blooming like crazy!  I don't want the cold hearted orb that rules the nights to take away these colors from my sight! 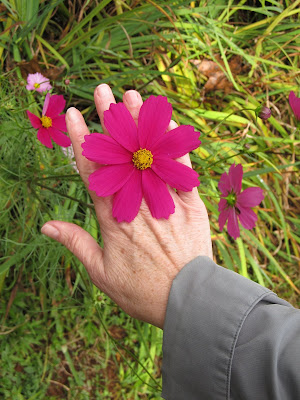