April is amazing.  My last blog post was two weeks ago today and since that time, our trees are almost in their full summer splendor of green leaves.  On our front porch, the amaryllis flowers are blooming nicely.  Can you spot a little character that Richard has placed between the blooms? My husband is quite a character himself! 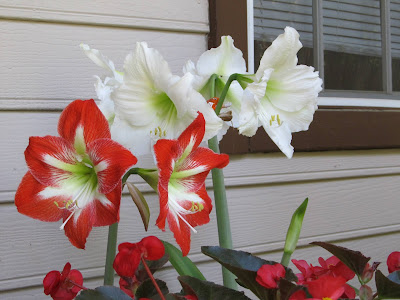 In case you can't see...I have another photo for you! 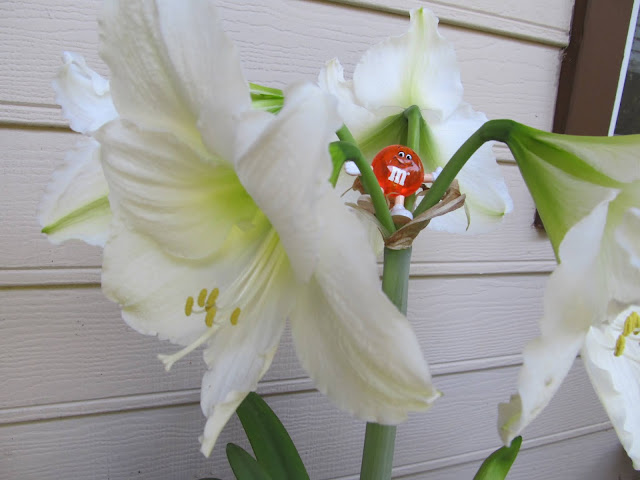 There, that should make you smile!

Asyndeton is a literary device that omits conjunctions. (From the Greek meaning "unconnected", it is used to shorten a sentence and to focus on its meaning. I can't tell you how much I loved learning this and reading different examples! Here's a famous one:

This really drives home the point, no time to clog up the meaning with "ands" in between!  I have read that using asyndeton gives writing a nice rhythm and pace. This somehow reminds me of how much I would like to edit both books and films...there is so much that just isn't necessary.  I do wonder...did any of you ever read the Reader's Digest Condensed Books as a child? I did and I enjoyed them immensely. I did have several teachers who told me that they disapproved of me reading them. They said that the authors would not like their books "condensed" for readers, that was not how they were written. I found that the books that were in the Reader's Digest Condensed Book series were very often so good that it really didn't matter if I didn't get the "whole" picture so to speak, if the writing was good, it was good. Period.  And I have always appreciated something that gets to the point.  (In Britain, they say "full stop" instead of "period.")

We were able to see our son recently and as always, I asked him to play his guitar and sing us a song. One of the songs that he did...oh, how I wish I could have it on this blog post for you all to hear...was "Everybody Wants To Rule The World", a song from the 1980's by the English group, "Tears For Fears".  Now, no offense to those men in the group, but honestly, Christopher's vocal is better. No lie.

It's a good song!  You should listen to this and march around the room for exercise. You know that I do.  (And I loved the 1980's! So, it makes me happy to hear this music!)