In 2013, I wrote a post about Harry Warren.  (Oh you know you want to read it again! You may read about the great songwriter just here!) Just in case you don't have time to go and read it, I will tell you that Harry Warren was a great songwriter and chances are you know many of his songs and yet, you don't know this songwriter's name! ("Chattanooga Choo Choo", the music by Harry Warren,  was the very first gold record, meaning it sold over one million records.)

In that post, I mentioned that I had found a great video of Harry Warren singing with Ian Whitcomb but was unable to get the video on that post. Better late than never, I have it here for you!  Looking further, I was sad to learn that Ian Whitcomb passed away in April of this year. He was 78 years old.  (Harry Warren died in 1981 at the age of 87.)

"Home In Pasadena" was one of the earliest songs written by Harry Warren.  He wrote the music, the lyrics were by Grant Clark and Edgar Leslie.  It was published in 1923.  The British band, "The Pasadena Roof Orchestra" which specializes in 1920 and 1930's swing music was named after the song.

If the sun is shining, the butterflies are out on our Mexican sunflowers (Tithonia).  If you want a flower to attract butterflies, I highly recommend this flower! It is like a magnet.  What a pleasure it has been to see all the butterflies! This is a photo that Richard took of the butterfly called "American lady".  I can never remember that name so I always say, "you know, the one on the cover of our butterfly book!"  Ha! It's true, it is on the front of our butterfly guide...it is very distinctive with those very lacy wings. Just gorgeous, but then,  aren't we all that way, my American lady friends?  Well, ya'all are anyway!

Take care everyone! Remember if you hear a song, try to look it up and see who wrote it, music and lyrics. These songs just didn't fall out of the sky, you know! 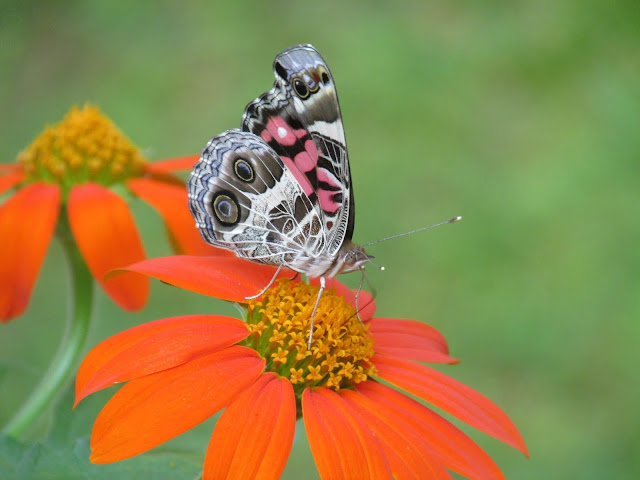