I wonder how many people started singing a song just as soon as they heard the royal baby's new name?  You know I did! The song "Sugar Sugar" by the Archies was a big hit in 1967.  It was the number one US single OF THE YEAR!  I knew it was a big hit in the USA but what about in England?  Turns out ,it was at number one for 8 weeks in the UK!  I learned today that the lead singer was Ron Dante and that HE was the lead singer for "Leader of the Laundromat", a parody of "Leader of the Pack".  (My Dad loved parodies and we had that record, I remember it well.) It amused me to know that Ron Dante sang on both of those records!

"Sugar Sugar" might sound dated today but it was a great song when you were on roller skates. When I hear that song, I am transported back to the early 70's and I can feel myself skating to the beat of that song. (Yes, it was a big hit in 1969 but with a catchy tune like that, it was still being played at roller rinks.)

Ah music!  I hope that I never run out of songs in my head!
"His shirts always came back brown...brown...brown."!!
My Dad always liked funny songs! 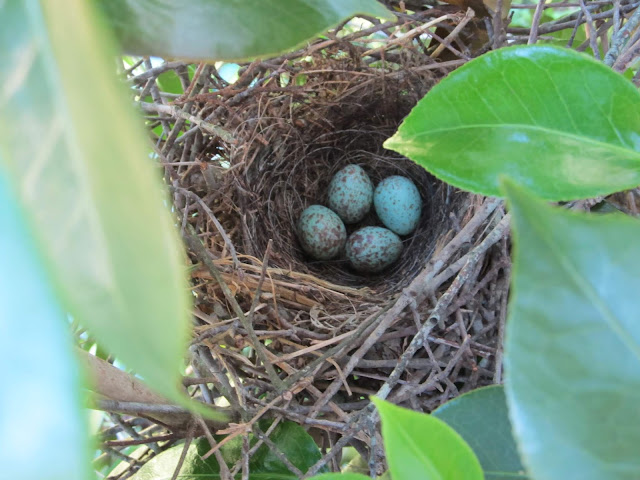 Look at these darling eggs.  These were at my Dad's house from 2 years ago.  He was so excited to show me this nest and was pleased that I took a photo of them. I think it was a mockingbird's nest.
Happy Spring to you all.