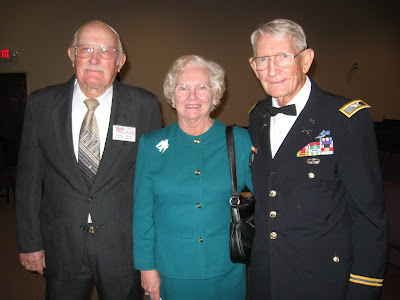 When I did my last post, I did not know that Col. Ben Purcell had passed away the day before.   Here is his obituary. I have written a post about the book that he and his wife, Anne wrote together.  It is entitled "Love And Duty" and I highly recommend it.  I just read a book review about it and it said that they told their story "simply, honestly and without bitterness".  Col. Purcell returned to Vietnam and FORGAVE his captors, just as Mr. Zamperini did. (See my other posts about Louis Zamperini!)  In the photo above that is my Dad on the left, Anne Purcell in the middle and Col. Purcell on the right.
I took this photo at Centennial Baptist Church after a Veteran's Day Service  in 2008.  Col. Purcell and his wife, Anne had both spoken of their experiences during the Vietnam War.  Col. Purcell was 40 years old at the time of his capture and he spent 5 1/2 years imprisoned and 58 months of that was in solitary confinement.  During that time, Anne Purcell took care of the children (five of them) without knowing if her husband was dead or alive.  Anne was one of the founding members of the National League of Families that raised awareness of the POW's and MIA's in Vietnam.

It was such an honor to meet them both and to shake their hands.  Col. Purcell had such a strong handshake! Of course, he was in his full uniform with all his medals, but honestly,  he had such a strong military bearing about him, you could just sense it, even if he had been in civilian dress.  Such a strong Christian couple, I can't tell you how much I admire them!  I found a video that was made through a program on the history channel and please, take the time to click on the following and watch and listen to this remarkable woman. http://www.history.com/shows/vietnam-in-hd/bios  (Once there, click on Anne Purcell's name and then click the watch video at the bottom.)
If you watch it to the end, you will be rewarded by seeing Col. Purcell himself.  I love the home movies of themselves as a young couple which have been added into this video.  At the end it shows them playfully running into the camera and it captures their young love perfectly.

One of the things that I saw written about him was this:  "He was a soldier for peace and a warrior for the Lord".   I treasure the words that they wrote in my copy of their book. 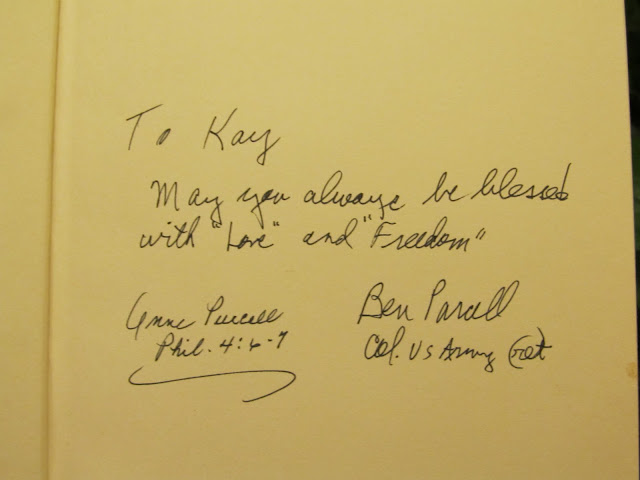 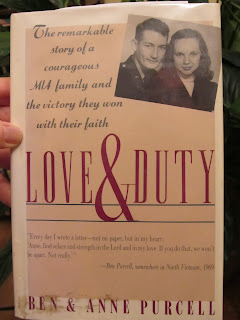 6 Be careful for nothing; but in every thing by prayer and supplication with thanksgiving let your requests be made known unto God.

7 And the peace of God, which passeth all understanding, shall keep your hearts and minds through Christ Jesus.