"Don't Give Up, Don't Give In" by Louis Zamperini & David Rensin

A new book will be released on November 18th, "Don't Give Up, Don't Give In: Lessons from An Extraordinary Life"  by Louis Zamperini and David Rensin.
The book was completed just two days before Mr. Zamperini's death in July of this year.  I have written several posts about Mr. Zamperini before.  I read "Devil At My Heels" by Louis Zamperini & David Rensin in 2004.  It is  where I first learned of his story and wrote a letter to the publisher and received a handwritten reply from Mr. Zamperini himself.
Louis Zamperini is a hero to me and now, after the hugely popular book by Laura Hillenbrand, "Unbroken" he should be a hero to many others.  The movie, "Unbroken" will come out at the end of this year, the release date is Christmas.  I hope that the movie will do well and will bring Mr. Zamperini's extraordinary life to millions!
I very much look forward to this new book.  I will most certainly tell you all about it when I read it!
You can see where this book will go on my bookshelf, it will be beside my copy of "Devil At My Heels".   (And that is "Love and Duty" by Ben & Anne Purcell, in case you can't read that title....Col. Purcell was a POW in Vietnam for 5 1/2 years and he also went back and forgave his captors, just as Mr. Zamperini did in Japan.)  Read all these books!  They are truly inspiring. 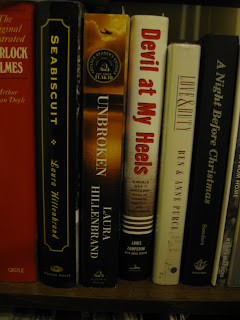