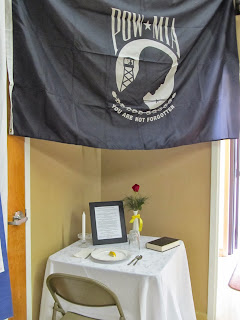 I just finished reading the most incredible book, "Vanished" by Wyl S. Hilton.  It will be published on November 5th but I was able to get an advanced reading copy.   (You may see a trailer about this book here. )  "Vanished" tells a remarkable story of some of  "The Long Rangers" from World War II.   On September 1, 1944, an American bomber left from the island of Palau in the South Pacific with eleven men aboard: it never returned.  The families were left with no explanation, or closure.  The book goes into great detail about grief, that is, for the families who have lost loved ones that are classified as missing in action that there is always the hope, unlikely as it is, that their loved ones are alive.  In the case of these eleven men, there were cruel rumors that some of them had survived and simply deserted their families.  The chapters in the book alternate between telling the background stories of the missing men and then telling of the efforts of all those who finally located the missing plane.  And the deep sea divers, archaeologists and explorers who worked so hard are worth every chapter that the author has included. One man in particular you will truly admire is Pat Scrannon. It is incredible to read of the years that this one man alone contributed. You may read more about him and the BentProp Project here.
I have written of Louis Zamperini... he was one of the "Long Rangers" of the South Pacific, so called due to the long range bombing missions which were the longest in American history. (Mr Zamperini crashed, survived for 47 days at sea and then spent two years as a POW.)  Even though many know of the fame of the airmen in Europe, few know of the airmen in the South Pacific.
The author also points out that when the airmen crashed into Europe, the remains of the plane were, for the most part, over land.  In the South Pacific, the ocean swallowed many of the planes and the bodies were never recovered.
"Vanished" is a very special book to me.  I felt as I knew every one of these young men on the plane over the South Pacific and was quite emotional when...well, you just need to read the book, that's all I can say...
The photo that I have here is from the Veterans Day Dinner that I always attend with my Dad every November.  They always have one lone table set in a special way to honor and remember those who have been declared MIA (missing in action) or POW (prisoners of war).
YOU ARE NOT FORGOTTEN. 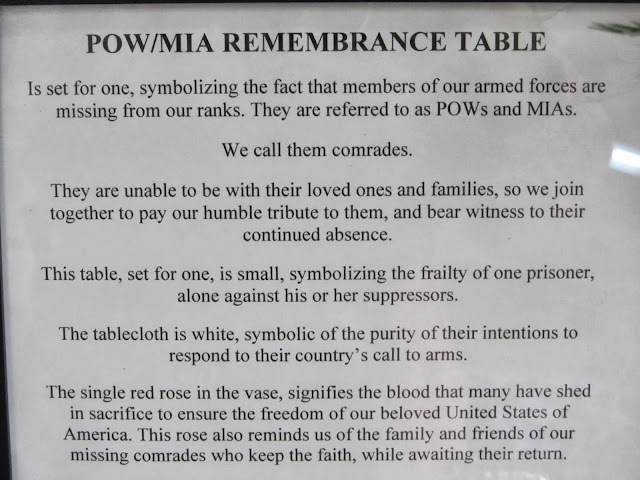