Anybody remember my post about the dog captured in a sunbeam?  You may read it here.  While serving in Afghanistan, this family's son rescued this dog.  After their son's death, they fought to bring the dog who they named HERO to the USA.  (The photo shows the dog going out into their backyard and the dog being bathed by a beam of sunlight, as if from heaven.) This TV broadcast tells us that this same family just had their house burn down on Tuesday. The dog was rescued but was not breathing...the firemen administered oxygen to the dog.  Hero is expected to make a full recovery! 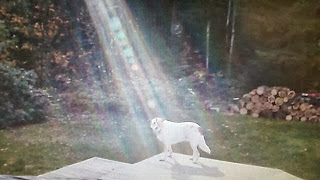 I am grateful that this dog survived.  (No one was home during the fire, another dog and two cats were also rescued.)  Thankfully, the family were able to save their son's medals and his American flag.

The title of this post is "Hero".  May I just say that Justin Rollins (the young man who gave his life in Afghanistan) and the firefighters are true heroes to me.  My prayers go out to the Rollins family in New Hampshire.  And I don't wish to sound flippant, but in case the Rollins family reads this, I want you to know that I hope Boston wins the World Series, I am sure that y'all are RED SOX fans!
Posted by Kay G. at 9:57 PM