Now, I must tell you... the evening before our son's concert, we had a terrific thunderstorm. It came on quite suddenly as I was cooking dinner. Here is a piece of advice for you: DO NOT stand at a metal stove during a thunderstorm, DO NOT open a window during a thunderstorm, DO NOT use metal tongs. Any one of those things might have been okay by itself, but all three combined, meant that I had a bit of a SHOCK when some lightning hit nearby. I am okay but it took a day or so for my right hand to get back to normal. I am hoping that it left me with some special "super" powers, you know, kind of like Spiderman?  I wonder too, could it have left me with some positive energy, and that means I can transmit this to you as I am typing this post?  I think it's possible!  You know, kind of like GOOD VIBRATIONS from the Beach Boys! (Really, I suppose I would have had to survive an earthquake to use that analogy, but hey! I have been hit by a bit of lightning, so cut me some slack, okay?) One of the things that I read was that after being hit by lightning, it could cause some confusion.  HA! How will I know any difference?

I hope you will love this video I found for you of the Beach Boys.  I ADORE the Beach Boys. They are so young and gorgeous in this video.  It's so great to see Brian Wilson having everything just so, he is such a genius, you know.  I have told you before of a book about them but I will tell you again.  It is "The Nearest Faraway Place" by Timothy White.  READ IT!  It is not just about the Beach Boys but also about California and the history of those who settled there and it is a fascinating book.

Our crepe myrtles have been spectacular this year, just beautiful.  They looked really good at my Dad's this past weekend and you know he had to cut some for me to take home, along with some of his sunflowers and an ear of corn in the bouquet.  Hope you are having a colorful summer.  Just don't cook during a thunderstorm! Promise me! 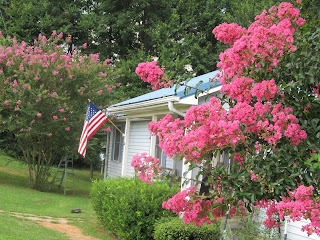 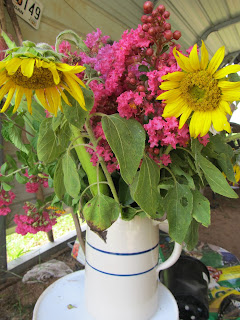