The REAL Lord of the Flies! (The Last Hobnob) 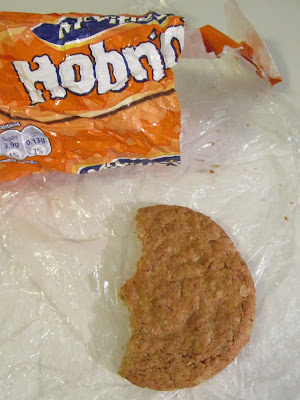 Is it just me or does my half eaten Hobnob look like the moon? Yes, this is the kind of thing that entertains me, my friends!
Listen, the real reason I took a photo of this was to tell you that this is my very last Hobnob.  I brought this back with me when I visited England in October 2019. The sell by date for these biscuits was May 11, 2020! That means if you plan on sailing around the world, take some Hobnobs!

Now, I am not sailing around the world anytime soon but that does remind me of a story that I want to tell you about...

I am sure that you have read the book "Lord of the Flies". If you haven't read it, then you must have heard about it. Seems like we had to read it in school. It is a book of fiction written by William Golding in 1954, about British boys stranded on a desert island and well...it's not very pretty, shall we say.  Now, what if I told you about a true story of boys on a desert island?   It is fascinating!

In June of 1965, six teenage boys "borrowed" a boat and sailed away. They were in a Catholic boarding school in Naku'alofa, which is the capital of Tonga, in the South Pacific.  Caught in a storm, they drifted for eight days with no food and no water.( They managed to catch rainwater in some coconut shells and shared it amongst themselves.) On the eighth day, they reached an island (not the kind with gorgeous sand and palm trees but an island that was mostly rock and is today considered uninhabitable named 'Ata.) They set to work with a great determination to survive. These six teenage boys lived for 15 months on coconuts, fish and tame birds. These kids worked together! They worked out a two man roster for garden, kitchen and guard duty. Whenever there were arguments, this was settled by "time outs". Each day began and ended with a song and a prayer. (They had made a guitar from a piece of driftwood, half a coconut shell and six steel wires from the boat.)


I read about this in a British newspaper and you may read the same piece just here!  Please take the time to read it, you will also see photos!  (Rutger Bregman is the author of "Humankind" and is the Dutch author who unearthed this story. He discovered this story because it was...oh be still my heart...mentioned on a blog!

The boys were rescued on Sept. 11, 1966 and the doctors were astonished at the boy's good health. They had survived because they had worked together and had learned to lean on each other. Their true story is the one that should be read in schools! Captain Peter Warner who rescued them, wrote his own account of this and said, "Life has taught me a great deal, including the lesson that you should always look for what is good and positive in people."


Can you imagine the JOY of the families when they were reunited with those boys? (They had been assumed dead and they had had funerals for them.) AND I do wonder what it would have been like for them, what foods did they want to eat first? I hope they didn't give them a SEAFOOD buffet they like did for Tom Hanks in Castaway! (Sorry, I know I am veering over into fiction here...but I did enjoy that film but why would you have shrimp for someone just rescued off an island?) See the things I think about?

https://www.youtube.com/watch?v=eDz-331V-pY
Can't seem to get that video on here but if you click on the above, you should be able to see it.  It is so worth watching!