The song "Respect" is very well known with  Aretha Franklin as the singer and very rightly so but I hope you know that the song was written by Otis Redding! We lost Otis Redding very early, in 1967 in a plane crash when he was only 26 years old. (The smash hit, "Sitting On The Dock of the Bay" was released just days after his death.) Besides being an incredible songwriter, he was an amazing singer. We lost Aretha Franklin in 2018. Both are gone now but we still have their songs to enjoy.


By now, you must be thinking how does Robert Louis Stevenson somehow work into this topic on respect? Here is what sparked this connection:  Several months ago, on an episode of "Jeopardy" all three contestants could not answer the final Jeopardy, which was this: "When he died in Samoa in 1894, his obituary said, 'He loved Samoa better than any other place, except Scotland.'  Of course, the answer is Robert Louis Stevenson! (Except on Jeopardy, all answers are in the form of a question, so I was saying, "Who is Robert Louis Stevenson!" to the TV!)  Now, these contestants had hardly missed a single clue on this show and yet, not one of them could answer that correctly!  I would be interested to know if this is true in other countries but in the USA, teachers did not encourage students to read any of the books by Robert Louis Stevenson.  His books, "Treasure Island" and "The Strange Case of Dr. Jekyll and Mr. Hyde" are the most well known. So, in America his books were relegated to the children's books section and the horror section. (And yes, he also wrote the very popular, "A Child's Garden of Verses" but we should not think that is all that he wrote! And even if that were so, I very much respect authors who write for children!)  In the Norton Anthology of English Literature, he was completely excluded from 1968 to 2000. What does someone have to do to get respect, for Pete's sake? Not only was he an outstanding writer but I think he was a fascinating person as well.  I have read that in the last part of the 20th century, his writings received more attention and praise.
If you want to see a list of all his writings, you may go to this website just here.
While there, make sure you read about the letter that he wrote defending Father Damian in Hawaii. And his friendship with King Kalakaua of Hawaii and the king's daughter, Princess Kaiulani.  I think this says quite a bit about the character of Robert Louis Stevenson.  (Once again, the life of Princess Kaiulani...how fascinating! You may read more just here!)

Born in Edinburgh, Scotland in 1850, Robert Louis Stevenson suffered from poor health for much of his life and he only lived to be 44 years of age. He traveled to many countries and wrote stories from each place he visited. He married an American woman named Fanny Osbourne. I think she was fascinating in her own right! You may read her story just here.  On a personal note, I was thrilled to read the book "Sailing Alone Around The World" and Joshua Slocum stopped in Samoa on his journey and visited with Fanny Stevenson! What a charming host she was to him! (His voyage was from 1894 until 1898, so the visit would have been after Robert Louis Stevenson's death.)  I am not sure how long she stayed after his death, because she did go to California to live and...well, read about her! I think her life would make a great film and to combine her story with the writer, Robert Louis Stevenson...well, another movie that needs to be made!)

Here are a few quotes from Robert Louis Stevenson that I like:

"Keep your fears to yourself but share your courage with others."

"Don't judge each day by the harvest you reap but by the seeds that you plant."

"Our business in this world is not to succeed, but to continue to fail, in good spirits."


Continue to fail, in good spirits...I don't know about you, but that is the kind of person that makes you smile and gently gives you inspiration.  And I think someone like that deserves our respect.


I might have shown you this photo before, it is the pier from Eastbourne, completed in 1872!
Love it! 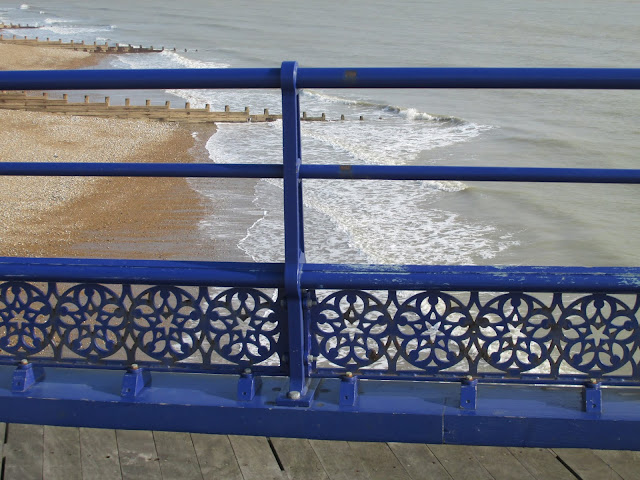 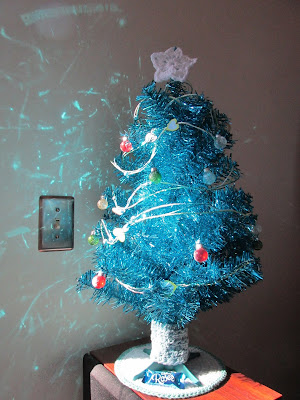 AND I am happy to tell you that when we were putting away our Christmas decorations, we found the blue Christmas tree! It is only a little tree, very inexpensive but Richard enjoyed taking photos of the lights on the wall with the afternoon sun. So, we will have it next year! "It's not a bad little tree, it just needs a little love."  And respect! (And someone who won't forget where it is stored.)