In a recent post, I mentioned to you that Bill Paxton had died.  Richard recorded several episodes of the TV mini series "Texas Rising" for me, about the Texas Revolution.  (It had originally been shown in 2015.) Bill Paxton was one of the leading characters, portraying Sam Houston.  Interestingly, Bill Paxton is related to Sam Houston!  Here, are his words...

There, isn't that something?  There is a link of Bill Paxton speaking of the experience of "Texas Rising":  just here.

Just an aside, I often speak to people who have names that I recognize: Crockett, Key, Davis, Redding...I ask them if they might be related to the person I am thinking of...and very often, the answer is YES!

Now, back to the show...I have some criticisms of the film but for the most part, I really liked it. Right off the bat, we noticed that the gorgeous mountains looked out of place for east Texas! Sure enough, it had been filmed in Mexico!  It made me go straight to  the internet to look up all the names of those mentioned.   You all know by now I much I love reading and learning of REAL people!
Here is a list:
Davy Crockett
Jim Bowie
Sam Houston
Erastus "Deaf", pronounced 'DEEF' Smith"
Santa Ana
Jack Hayes
James Walker Fannin, Jr.  (from Georgia, Fannin County is named in his honor.  Killed in the Goliad Massacre.)
Emily West (A real woman but I think poorly represented here,
can we truly know what she was like? Thought to
inspired the song "The Yellow Rose of Texas".)
Mirabeau Lamar
Andrew Jackson (yes, that one, the 7th President of the USA, played by  someone I truly admire, the wonderful Kris Kristofferson!)
Thomas Rusk
Bigfoot Wallace

Now, there were quite a few characters that were completely fabricated, but I think it is quite easy to spot them. (Lorca and Billy Anderson, for example).  There is a website that I like to visit, "History vs. Hollywood" and you may see the link for this film here.

The Texas Revolution, along with the Texas Indian Wars, is a quite complex subject that can only be touched on in a short space such as this but I urge you to read more about it. It is fascinating.

Did you know:  Sam Houston was on trial in Washington, D.C. and Francis Scott Key was his lawyer? (Francis Scott Key, the same man who wrote the words to our National Anthem.)

That Santa Anna lived for a time in New York City and due to his efforts, we  have HIM to blame for chewing gum? (The true inventor is Thomas Adams who tried to use the Mexican "chicle" to make tires.  When this was unsuccessful, he remembered how much Santa Anna simply liked chewing it...he put together a batch and just like that, chewing gum!)

My friends, I want to thank all of you left such kind comments on my last post with your kind encouragement!  I appreciate you more than you will ever know.

I hope to walk this weekend!  I have a friend on the Isle of Lewis who also loves Stone Mountain and she will be having a medical procedure (it's surgery but let's call it a procedure...anybody know what movie that comes from?) and I want to send out BEST WISHES to her and to say that I am sending her my love, as I do to all of YOU!  God bless you all!  Have a great weekend! 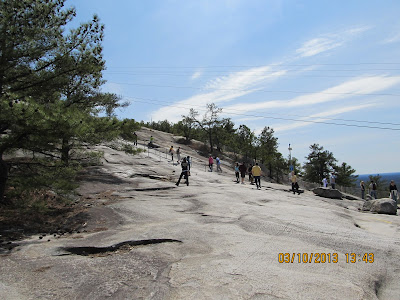 "Take Me To Texas" by George Strait. Enjoy!

One last thing...Bill Paxton was wonderful in this role, truly he was! I enjoyed him so much and I am so sorry that we longer have him but I am thankful that he was able to portray Sam Houston in this film.