Artful stone stacking...that is something that we often see on our walks over our local monadnocks (stone mountains in this area.)   This weekend, my husband and I were happy to run into Ranger Robby at Arabia Mountain and he told us that this coming Saturday will be a fun filled day at the mountain including something called Yoga Laughter (which I like the sound of) and also, Artful Stone Stacking. 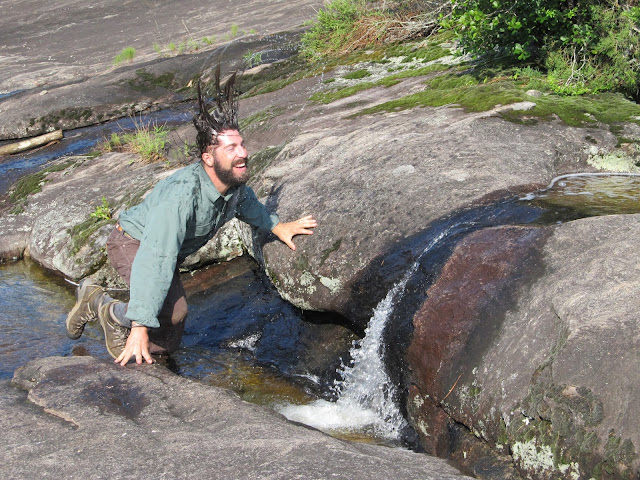 Anybody remember the last time we saw Ranger Robby?  It was last June and you can see him in the photo above cooling off in the waterfall!    Ranger Robby, you are a such a good sport to let us take your photo like this!  (Well, to let Richard take it, I should say, to be honest!)

I think I have mentioned the stone balancing done by a man named Adrian Gray in England.  I found a video for you.   He says that the placement of the stones are meant to invoke wonder...that reminds you of some other rocks in England, doesn't it?

Stonehenge in Wiltshire, England...you know I had to mention it in this post!  There are many theories as to the meaning and purpose behind the placement of these ancient stones.   I don't know, I only know I like the look of them.  It is not my aim in life to explain the world, I just appreciate beauty wherever I see it, the marvelous wonder of it all!

Hope you are all finding beauty wherever you are and that you are all doing well.  We just had the most beautiful weekend with many of our trees coming into bloom.  It was a shame to lose even one hour of it! (Daylight savings time for us now.)