"Inspector Morse".  That is one of the British shows that I enjoyed watching for years with John Thaw playing Morse.  We have also watched  "Inspector Lewis" ( with his sidekick, Lewis as the Chief Inspector now.)  We loved both of those shows.  A few months ago, I was really happy to watch "Endeavour", which is the prequel to "Morse".  It tells the story of Morse as a young man just starting out...if you get the chance, please do NOT miss any of these shows!

Now, besides the great acting and the beautiful background scenery in Oxford, I really appreciate the music of all of these shows!  Do you remember the music from Inspector Morse?  Can you recognize that the opening notes have a background of what sounds like MorseCode?  It's true! It spells out "MORSE" in Morse Code!   Isn't that incredibly clever? The composer, Barrington Pheloung is from Australia but studied music in England and now lives there.   I notice that he also did the music from a rather disturbing TV series called "Red Riding" which I have to tell you is so very intense that at times I simply could not watch it.  However, the music was excellent.

In my last post I gave you a name of a lyricist, Haven Gillespie, that I bet you have never thought of...now, I have given you the name of a wonderful composer, Barrington Pheloung.  See the things you learn from me?  (Oh, and if you ever need to know this- if you are ever locked up somewhere in a room and you can't scream for help, you can use Morse Code and tap out S-O-S. You do this by three short taps, three long knocks, and then three short taps.  That should do the trick. I think that is right and my computer is so slow, I can't look it up right now. If that isn't right, well, I hope you are never in an emergency when you are with me, you would be OUT OF LUCK! HA!)

Hey! This time last year, Richard and I climbed Panola Mountain!  Not this weekend or today, we have had a lot of rain and a lot of gray, overcast days.  It could be worse, at least we don't have snow!
Stay warm and dry everybody! 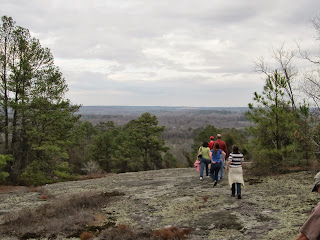