There has been extensive coverage on the 50th anniversary of the assassination of John F. Kennedy this week.  Today, the president laid a wreath on the JFK memorial at Arlington Cemetery.  Peter Watson from the BBC was in New York in 1963 when he heard of the shooting in Dallas and he quickly flew there and filed a report.  This report has been reprinted on the BBC website this week and not only it is very well written but I find his observations to be thoughtful and insightful.  You may read his report here.  It has been reproduced as if you are reading his actual type-written notes, and I found it very effective that it was done in this manner. (Could this actually be his report typed on a typewriter? I have no idea, I only know that it is moving for me to read it this way.)

"The waste and pathos brought me closer to tears more often than I have ever been before".  It is interesting for me to read how someone from another country lived through these events.  I was only six years old but I remember very well, the shock and the sadness that the country experienced.  If you don't have a chance to read this article just now, please read it when you can.

And in case you miss it, it says that Peter Watson died just last week.

I still have to tell you about the services (I went to two of them!) that I attended on the weekend before Veteran's Day.  I took this photo of the young men who reenact the raising of the flag at Iwo Jima...they hold this for several minutes and it is quite impressive.  John F. Kennedy was in the South Pacific, during World War II and the best account that I have read about his heroism after the sinking of his PT boat was written in a book entitled "Johnny, We Hardly Knew Ye".  If you get the chance, read that book, it's very good. ("PT 109" by Robert J. Donovan is another one.) You might have seen the movie made with Cliff Robertson playing JFK, if not...I highly recommend it. 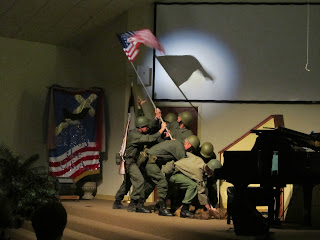