Stone Mountain/Walk Or Ride To The Top? 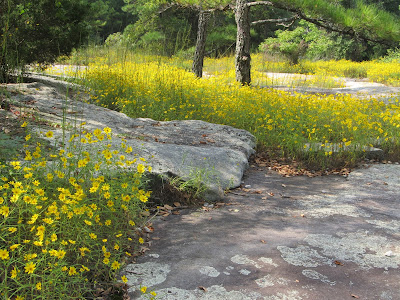 Stone Mountain on Saturday and the Yellow Daisies were just beginning to bloom at the base of the mountain but as we climbed higher, it made quite a difference in the blooms.  In the photo above, this is close to the halfway mark and the blooms were incredible!  The fragrance is such a light scent, quite wonderful but I don't think that many people noticed it.  In fact, there were lots of people climbing the mountain but we only saw a handful stop and admire these flowers. We can't understand it.  I told Richard that perhaps it is because it is mistaken for bitterweed which is very common and grows in pastures.  Sure enough, we saw a comment to this effect on Facebook.
You'll never guess what we saw in the Confederate Hall, the building at the base of Stone Mountain...they have a display case and since there is a sky lift to the top of Stone Mountain, there is a small sign showing sky lifts from around the world and one of them is... 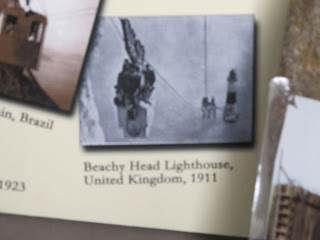 From Beachy Head, which is in Eastbourne, England!
We were surprised to see this! All the other sky lifts shown were actual sky lifts. We think that this was used at Beachy Head as the lighthouse was being built.  Was it ever used for tourists as a sky lift? I don't believe so, but I could be wrong. You can see from the photo above that the men are just holding on for dear life, it looks to me that they are the workers who have been working on it.
This lighthouse is no longer used, but it is still there at Beachy Head and it makes for a lovely photo! 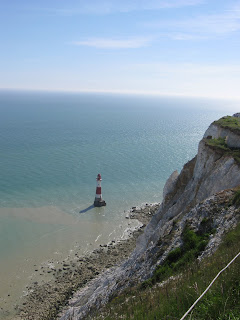