Oh dear, I am a bit out of it...it just took me three tries to find that "new post" button on this blog to begin writing this post! I believe that I am having a reaction to a shot that I got yesterday at my annual physical.  This is like having the flu...body aches, shortness of breath...but hey, I look good anyway! HA! (You have no idea how funny that really is!)
Anyway, folks, I was able to watch a very good movie last night all wrapped in my housecoat and I want to tell you to make sure you watch it!  It is "Bridge of Spies" and it is based on a true story of...well, spies, of course!   It is based on a book by the same title by Giles Whittell, a British journalist who is a lead writer for the Times.  Funny thing, I just read that the author sued DreamWorks (the studio behind the film owned by Stephen Spielberg who also directed the movie) because they did not have his permission to use the title. Oops!  (Not sure how this turned out, I imagine some settlement might have been involved, just a guess, I really don't know.)
Reading the true stories behind each character in the movie, I found them all to be fascinating.  I urge you to read more about them AND to see the film.  Of course, liberties are always taken in filmmaking (Hollywood!) but for me, true stories are always the best.  Hey, I am so feverish, I might even read a novel!  Nah, that is NOT going to happen! 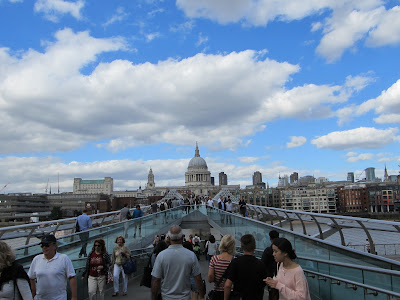 The name of the film refers to the Glienicke Bridge which connects Pottsdam to Berlin.  I have never been there but I have a photo of the Millennium Bridge from London for you! That might be the closest I ever get to Berlin.  (My Dad was in Berlin just after World War II when he was only 18 years old. Oh dear, that will be for another post!)