When Richard and I visited London in September, we spent several hours inside Southwark Cathedral.  Richard was very happy with his camera, snapping photos as we walked along (and  the Cathedral asks for a small amount, two pound fifty, for a photography pass, which Richard was very happy to pay!) As we admired the windows,  the architecture, and the sculptures, we also read many of the memorial plaques within the church.  I wonder if you can imagine how I felt when I saw this one... 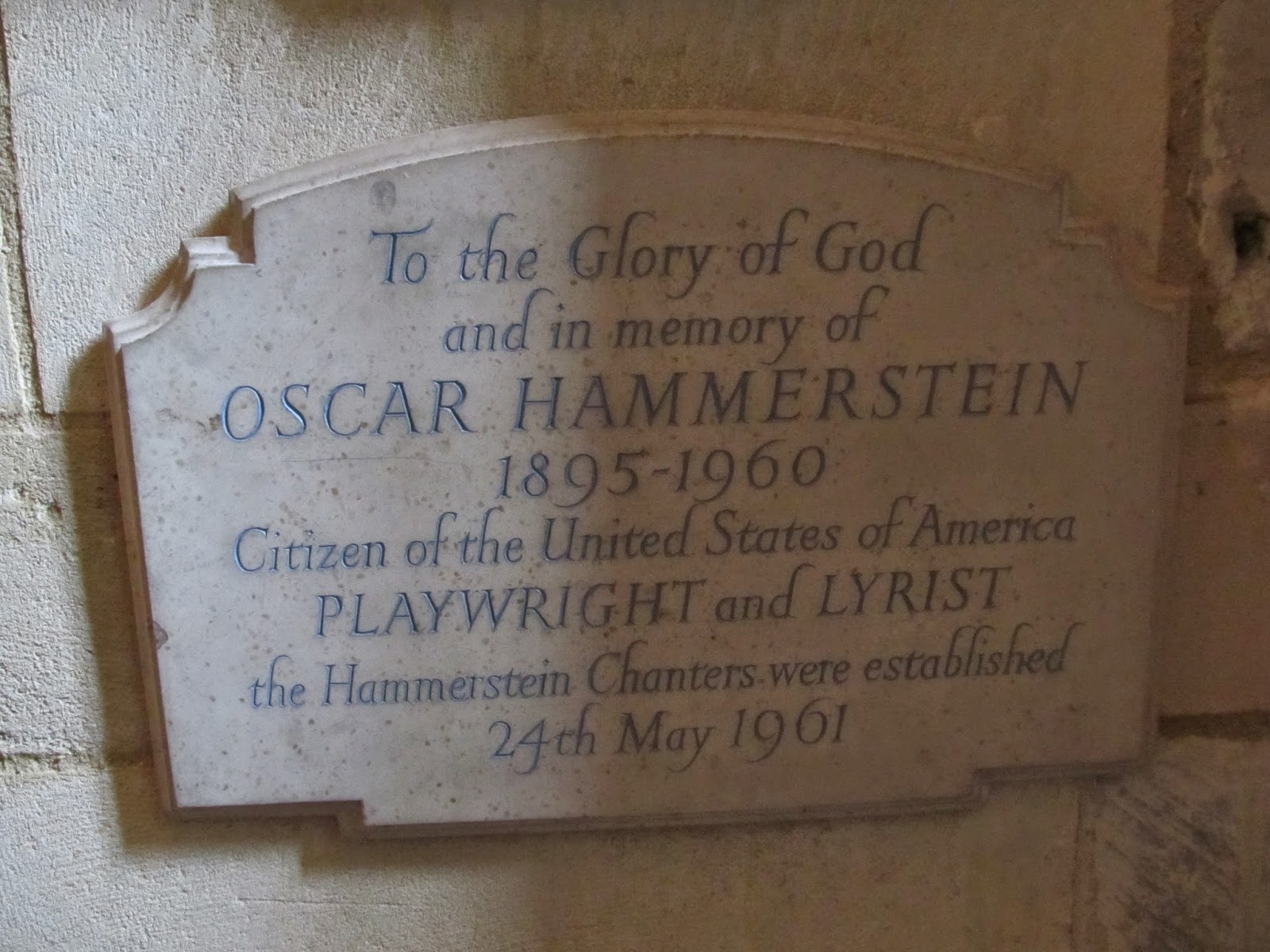 I adore  Oscar Hammerstein!  Please tell me that you recognize his name! (Click on his name there to read more about this remarkable man!)  If I say "Rodgers and Hammerstein", that might ring a bell with you.  They wrote beautiful music together!  Richard Rodgers wrote the music and Oscar Hammerstein wrote the lyrics for some of the most famous musicals that you know...
Here is a listing of them....         Oklahoma!
State Fair
Carousel
South Pacific
Cinderella
The King and I
Flower Drum Song
The Sound of Music


Before teaming with Richard Rodgers, Oscar Hammerstein also wrote the lyrics to tunes written  by Jerome Kern.  I loved the story of his wife overhearing someone say that "Old Man River" was written by Jerome Kern.  Her response was this: "My HUSBAND wrote "Old Man River"...Jerome Kern wrote "dum, dum...dum, dum,"...
Don't you just love that!
(Now, I hope this is a true story, it sounds like it could be, and I do like it so!)

What is the connection of Southwark Cathedral in London to Oscar Hammerstein?  Apparently, he loved the church and visited it quite often.  He fell in love with the choral singing and left money in his will for the church singers.

There are many videos I could have here with the music by Richard Rodgers and lyrics by Oscar Hammerstein, but I have chosen "You'll Never Walk Alone" which is very famous in Liverpool as their football anthem.  I believe that they have this over the gate as you walk into the stadium there, I am sure someone from Liverpool could verify this for me!  (I will correct this, if I am wrong!)  The song itself is from their musical, "Carousel" but my husband suggested the version by "Gerry and the Pacemakers" and I agree, I love this and I love the video!

"I know the world is filled with troubles and many injustices. But reality is as beautiful as it is ugly...I think it is just as important to sing about beautiful mornings as it is to talk about slums. I just couldn't write anything without hope in it."   Oscar Hammerstein


If you are wondering about the word "lyrist" on the plaque instead of "lyricist"...apparently, the words mean the same, according to the Collins/English dictionary! Hey, I don't know, I just looked it up!
Posted by Kay G. at 9:18 PM